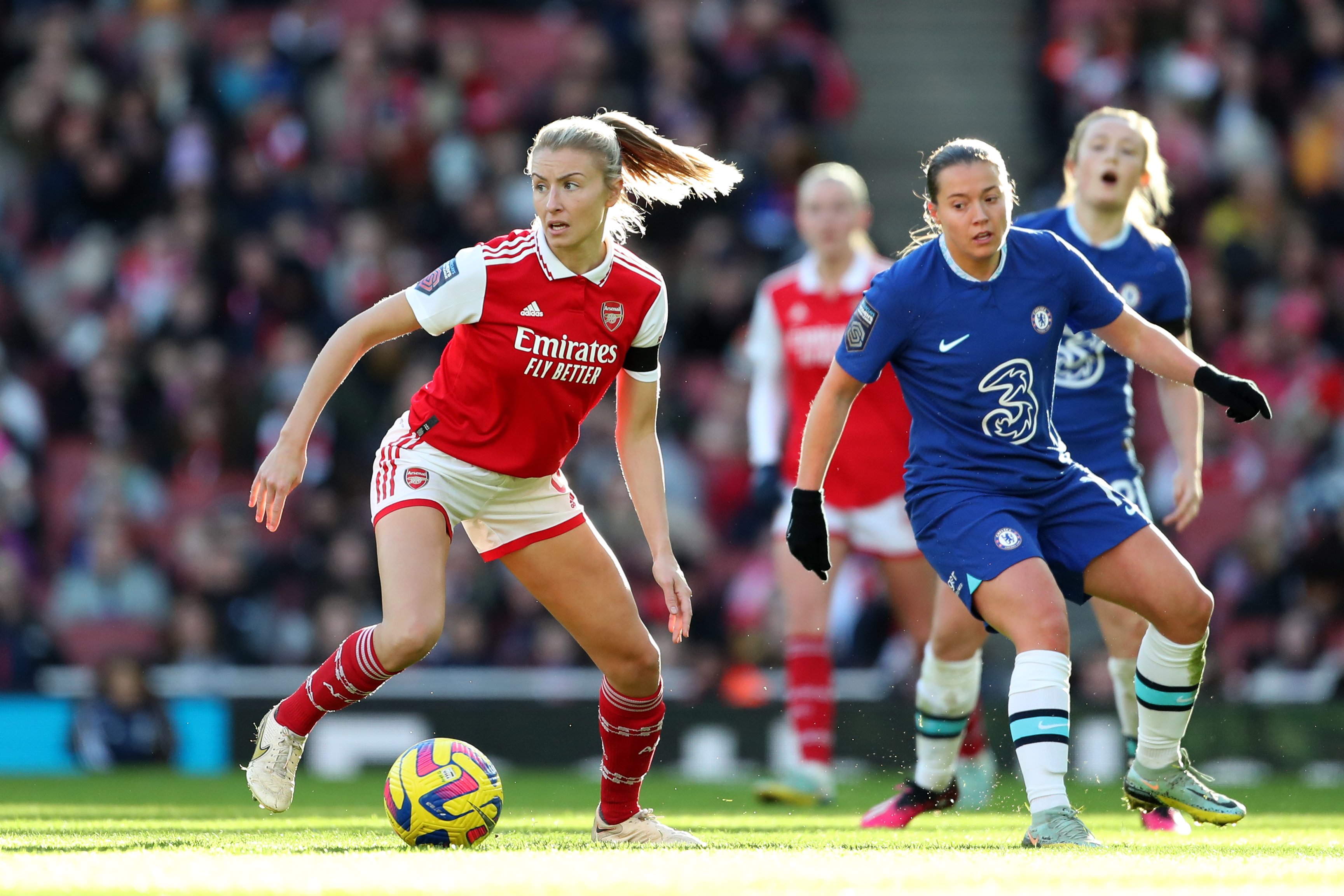 Leah Williamson of Arsenal during the Women’s Super League clash at the Emirates against Chelsea. CREDIT: Mark Leech / OFFSIDE

Arsenal Women were just one minute of normal time away from drawing level with Chelsea at the top of the WSL table when Sam Kerr slipped in behind Leah Williamson to head home the equaliser in the dying embers of a thrilling Sunday lunchtime clash.

The Gunners dominated Chelsea, roared on by the Emirates crowd, and took a deserved lead from the penalty spot when Kim Little kept her cool after Foord was brought down in the box.

However, the absences of both Beth Mead and Vivianne Miedema were laid bare as Arsenal failed to really test Zecira Musovic in the Chelsea goal, allowing Emma Hayes’ side to fight back into the game.

Hayes was able to call on the likes of Fran Kirby from the bench whilst Jonas Eidevall was reluctant to introduce any of Arsenal’s new January signings, and Arsenal fans were left feeling that they will not get many better chances to pick up three points against the WSL champions as both sides return to action this weekend with the equation at the top of the league remaining the same.

Arsenal travel to Brighton on Sunday evening in a repeat of the opening round of this season’s fixtures.

The Gunners won 4-0 at Meadow Park back in September, with Brighton refuced to 10 players just six minutes in when Emma Kullberg was dismissed for bringing down Stina Blackstenius. Brighton defended resolutely, but Arsenal’s attacking display was eye-catching and the Gunners sent out a real statement in the same weekend that Chelsea lost to newly-promoted Liverpool.

Four months later and Arsenal are third in the table, level on points with the impressive Manchester United and three points off Chelsea with a game in hand.

Brighton have lost six of their nine WSL games and find themselves four points clear of the relegation zone in eleventh place. The Seagulls dismissed former England boss Hope Powell following a humiliating 8-0 home defeat to Tottenham in late October, with Jens Scheuer taking over in the winter break.

Scheuer’s reign got off to a nightmare start last Sunday, with Brighton the victims of a first win of the season for relegation strugglers Leicester, who brushed the Seagulls aside in an emphatic 3-0 win at the King Power.

The former Bayern Munich manager has made a host of new signings, including goalkeeper Lydia Williams, who joined the club on Thursday. Williams left Arsenal in July after two years at the club, and could make her first start on Sunday night.

Brighton will be under pressure to respond after their loss against Leicester, with Arsenal needing to find a new attacking formula. Jonas Eidevall will see this as a better opportunity to introduce the likes of Gio Queiroz, along with Kathrine Kuhl and Victoria Pelova, compared to the Chelsea game.

The Blues host Liverpool on Sunday lunchtime and could extend their lead over Arsenal to six points before the Gunners get underway. It’s all to play for.