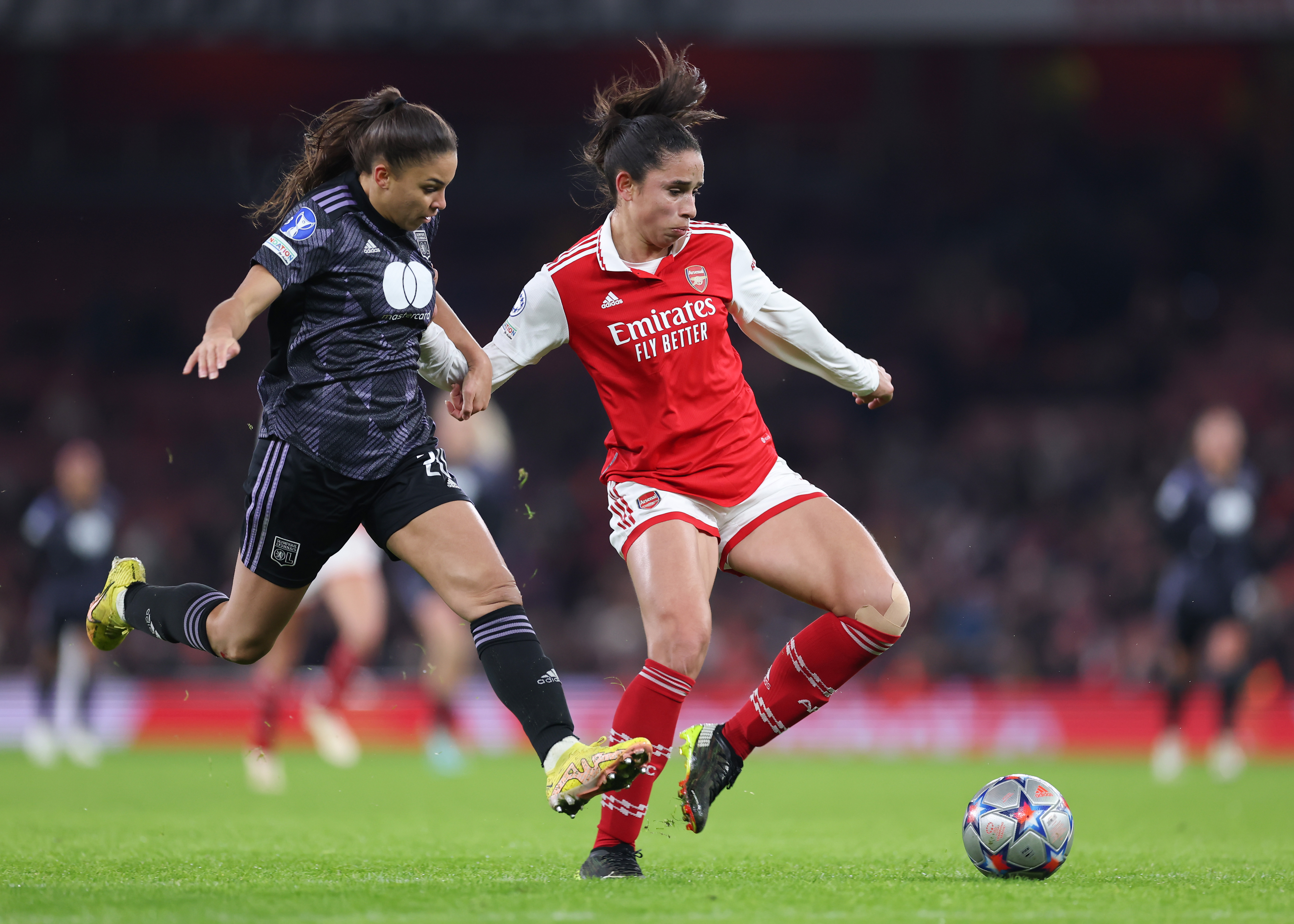 Delphine Cascarino of Lyon and Rafaelle Souza of Arsenal battle for supremacy during g their Champions League clash at the Emirates in December. CREDIT: Jacques Feeney / Offside

The Women’s Super League returns after its winter hiatus with one of the biggest games in European football as Arsenal take on Chelsea in front of yet another bumper crowd at the Emirates.

After losing their opening WSL game to newly promoted Liverpool, Chelsea have proven once again why they are champions of England’s top flight. The Blues are on a nine game winning run in the league after the opening day defeat and haven’t lost in any competition since, and a win at the Emirates on Sunday will give them a six point lead over Arsenal at the top of the table.

Arsenal do have a game in hand on the league leaders after finishing within a point of Emma Hayes’ side last season, but the Gunners have been hampered by ACL injuries to Beth Mead and Vivienne Miedema, two of the finest players not only in England but in the global game.

The return of Leah Williamson and Rafaelle Leone in defence in December could not have come at a better time; one only has to look back to Chelsea’s 4-0 FA Cup final win over Arsenal back in 2021 as evidence for what can happen when Arsenal’s defence is not at full strength.

Jonas Eidevall was under pressure to deliver in the January transfer window, and the Swede is confident that Arsenal’s business isn’t finished yet, claiming that he would be “disappointed” if the Gunners don’t add a “prolific striker” to their ranks by the end of the month. Highly rated Dutch midfielder Victoria Pelova has arrived from Ajax as well as 19 year old Kathrine Kuhl from the Danish top flight.

As The Gooner called for last month, Jonas Eidevall has also taken the option to recall Brazilian winger Gio Queiroz from her loan spell at Everton. With Jordan Nobbs joining Aston Villa after twelve years at Arsenal and talk of Mana Iwabuchi parting ways with the club, the opportunity is certainly there for the likes of Queiroz to show what they can do in the remainder of the 2022/23 season.

The Emirates will provide a baptism of fire for Arsenal’s new signings, with the Gunners fully aware of the significance of this game to stay in the title race and send out a statement that they can compete even without Mead and Miedema for the rest of the season.

If Arsenal can relish the 45,000+ fans in attendance, like they did in the North London Derby back in September, then the Gunners can take the game to Chelsea and look to make early inroads. Emma Hayes will have her side fired up to take all three points back to West London, and the touchline antics between her and Eidevall could be worth keeping an eye on too.

If this game isn’t stressful enough for Arsenal fans, it’s then the men’s North London Derby a few hours later in a pivotal day for both sides’ seasons! Strap yourselves in.