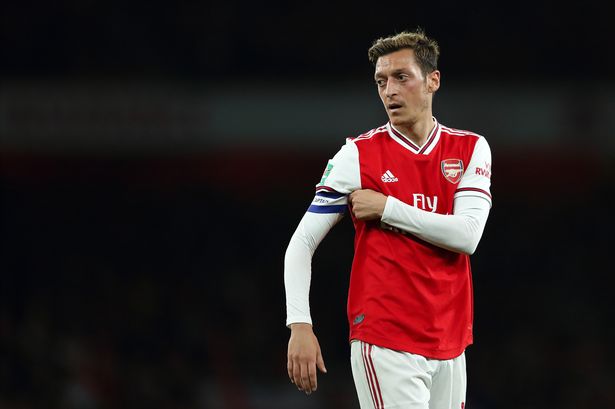 There were reports recently that Mesut Ozil had put his £10million mansion up for sale. And of course, putting two and two together, there was speculation it meant he was leaving Arsenal. However, given the experience of the attempted carjacking back in July, and specifically the subsequent threats to Ozil and his family, a more likely possibility is that he is looking to move to a more secure property. Ozil was paying for security guards outside his home in the aftermath of the incident, and there’s no reason to believe that isn’t still the case – there’s little question he can afford the peace of mind offered by their presence. So Ozil isn’t going anywhere in terms of who employs him to play football, but it’s a fair bet (and if you are thinking of placing any in the near future, be sure to check out this william hill promotional offer that he is not at the top of Unai Emery’s plans.

Ozil gave an interview to David Ornstein for the Athletic website this week, and stated, “You can go through difficult times, like this, but that is no reason to run away and I’m not going to. I’m here until at least 2021.” In spite of the change of circumstances in terms of his safety, Ozil loves life in London, and there it is difficult to see how anyone is going to pay him the wages he gets at Arsenal, even with an Aaron Ramsey style free transfer, largely because his stock has fallen. Emery may feel he can get by without Ozil (and that Arsenal are currently third favourites to finish in the top four with betfred would seem to vindicate his decision not to field Ozil regularly in the Premier League), but it is inconceivable that he will remain at the club for the best part of two seasons and not feature, given the club are paying an eye-watering £17.5 million into his bank account every year.

Ozil does create chances for his team-mates, there’s no question about that. They may not convert them, and his own number of goals scored has dropped since his earlier seasons at the club, but one suspects this is not the reason he cannot get into Emery’s first choice eleven. The head coach likes his players to work hard, and when recently quizzed about Ozil’s continued absence, he responded, “When I decided he shouldn’t be in the squad it’s because I think other players deserved it more.” In the current era, the amount of yards covered by players is easily monitored, and one imagines this is done in training as well as matches. So the conclusion is that Ozil is coasting during training (and in games proper didn’t do as much as his head coach wanted). Emery wants his attacking players to harry the opposition as well as get back and assist when the opposition are in possession in Arsenal’s own half. That doesn’t suit Ozil’s laconic style – the number 10 looks unconvincing when he has to compete for the ball. But ultimately, with this type of player, you either build the team around him or you have to tolerate his lack of what has been described as ‘water carrying’ contribution (Didier Deschamps was once dismissively referred to as a water carrier by Eric Cantona), playing in a system in which he is not pivotal.

So what lies ahead? A move really seems unlikely, unless Ozil grows so frustrated with a lack of playing time that he is willing to take a cut in salary, with the USA or Turkey his most likely options. Were he to consider, China he may even actually increase his salary, although the exodus of highly paid stars to that country does seem to be slowing down.

In terms of Arsenal, one can see Emery giving him game time again in the cup competitions, and in time, he may even find a place on the bench for the Premier League. But initially, it seems like he will have to up the intensity in training, and start to put in the hard yards. Emery wants players who will contribute, and does not tolerate passengers long-term. He’s given Ozil enough opportunities to contribute, but there it’s difficult to argue that, in terms of end product, he has not proven worth anywhere near the contract awarded in January 2018.

Ozil has had a tough time since Emery arrived for reasons which are nothing to do with Arsenal. His posing for a photo with the controversial Turkish president Recep Tayyip Erdogan led to a backlash in Germany before and even moreso after the 2018 World Cup, where Ozil’s country failed to get out of the group stage, resulting in his announcement that he would retire from international football. With less matches to play, that should have benefitted Arsenal. It didn’t. Ozil contributed little in Emery’s first season and has not had much opportunity to show any improvement in his second. Add to this the fears after the carjacking incident and on one level, Ozil’s life is going through a difficult patch. No doubt the huge wages he is receiving provide some comfort, not least the ability to afford protection for himself and his family, but he is now 31 years old. He won’t be too far short of his 33rd birthday when his contract with Arsenal ends.

It feels like a story in need of a surprise happy ending, but one you have to doubt will ever arrive.