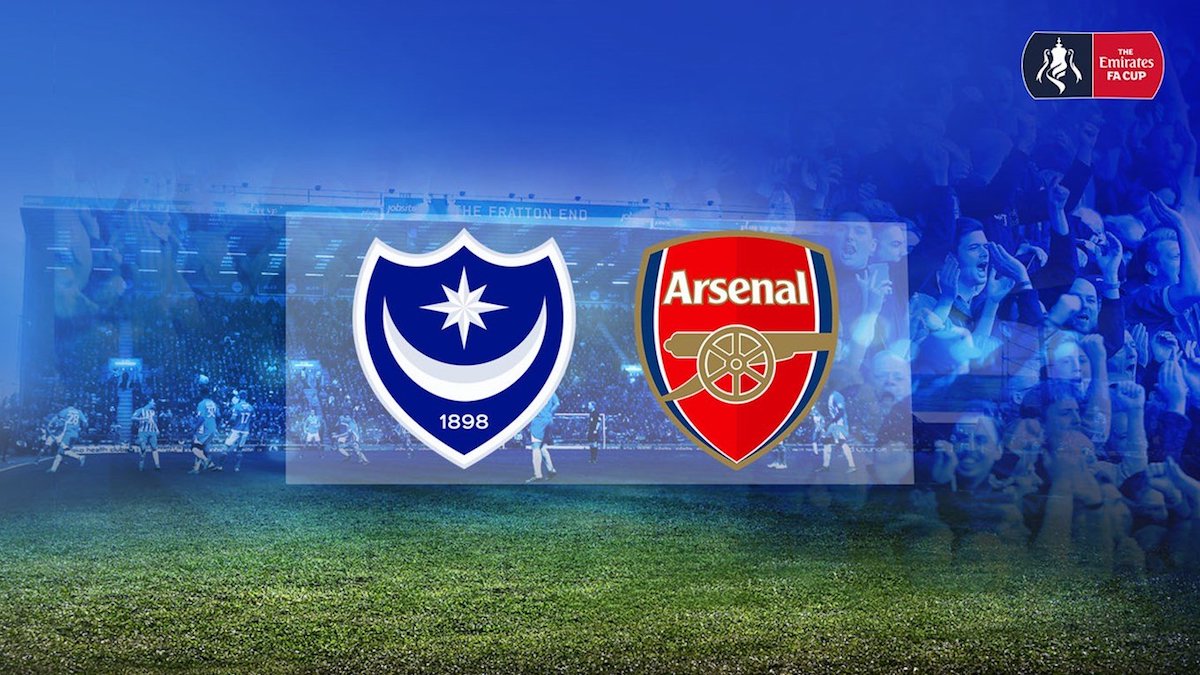 The usual five talking points ahead of tonight’s FA Cup visit to Portsmouth.

TV Hoping For A Giantkill
Once the draw for the fifth round was made, it was pretty obvious this game would be picked for television. Premier League side away to lower division opposition… cup upset possibility. Now, Portsmouth’s League One campaign is going well – they are in third place and you can’t discount automatic promotion to the Championship, and at the very least should make the play-offs, where a passionate support should assist them. I wonder if they've still got that barell-bellied shirtless tattooed guy in the daft hat who rings that bell – he must be getting on a bit now? Doubtless the cameras will pick him out if he still does his thing. Anyway, Pompey’s last victory over Arsenal was way back in 1958 – a 5-4 win at Fratton Park (cue jokes about the Gunners’ defending). They’ve played 21 times since, three of those in the FA Cup. So history suggests Arsenal progress from this tie – even if it has to be from a penalty shoot-out (no replays from this round onwards in the competition this season, due to the mid-winter break). You’ll certainly get decent odds on a Portsmouth win - and for your options there, check out betting sites at sportsbetting24.com - with the odds currently around the 7/2 mark with most bookies on the home side going through, even if it is with extra time and penalties (I’m assuming they haven’t got shot of extra time here as well by the way). One thing that needs stating – at home this season, Pompey have been pretty impressive - their last 15 matches at Fratton Park have seen 14 wins and a draw. So Arsenal need to do more than just turn up.

Invincibles Memories
Given Saturday’s hugely enjoyable result at Watford, let’s indulge ourselves for a moment and recall two very memorable matches at Pompey in the 2003/04 season. Who could forget that Saturday evening romp in the FA Cup quarter final, when Arsenal put on a footballing exhibition to win 5-1? That was the Invincibles at their best. Things were a little tighter two months later, with Arsenal, already confirmed as champions, travelling to Fratton Park hoping to see the season out undefeated. But for Jens Lehmann foiling Yakubu Aiyegbeni with ten minutes left in front of the away end, the Invincibles may well never have been. It’s fair to say it was a heart in mouth moment, as Arsenal saw the game out and got out of Hampshire with a point.

All change
Surely, this is a game where Arteta will field eleven players that didn’t start last Thursday – and many of those that did played the full two hours. So, I am predicting an eleven of Martinez – Sokratis, Holding, Mari, Maitland-Niles – Torreira, Guendouzi, Willock – Nelson, Nketiah, Martinelli. The only likely change to this would be if Kieran Tierney is fit, in which case I suspect Maitland-Niles will switch to right back with Sokratis stepping down. I reckon there will be a strong bench as insurance though. It will be interesting to see Mari, and it will be a rare start for Rob Holding under Arteta – he last played as a sub for Mustafi in the previous round at Bournemouth and only began a solitary game against Leeds in the 3rd Round. I suspect Arteta does not rate Holding’s ability on the ball, but some of us old school types wouldn’t be averse to seeing a bit of defending – which we know Holding can do.

The Significance of the Cup?
Depending how things go, should Arsenal progress, this competition might actually turn out to be their best hope of qualifying for Europe next season. Naturally, Arteta will be prioritizing the league as he will see that as an outside chance of actually securing Champions League football, and be very disappointed not to get the club at the very least into the top seven, which now guarantees Europa League after Man City’s League Cup win yesterday. Depending on who does win the FA Cup and City’s Euro ban being upheld, even eighth spot could get a Europa League berth. However, one thing that I think we can put to bed is the idea of winning a domestic cup as some kind of springboard to future success. We were all talking about this back in 2014 after Arsene Wenger’s eight season trophy drought came to an end with victory over Hull in the FA Cup final. So yes, a trophy would be highly enjoyable, but this isn’t 1987 people. There’s a lot more work needs to be done.

Old School Charm?
An advance warning about the away end for those making the trip to Fratton Park this evening. Now as it’s over a decade since the Gunners’ last visit, I’d imagine there might be a fair number of younger fans who are watching a game at Portsmouth for the first time. Well, prepare yourself. It’s like the old days. Ok, there are seats and a roof, and a certain charm in the dilapidation (were it a new ground, health and safety would have something to say about the amount of space behind the stand for sure), but a couple of tips - try to steer clear of the loos if at all possible and I’d say the food options were hardly gourmet to say the least. That was at least the case the last time yours truly visited in 2009, and given the financial struggles the club has endured since, upgrading the away end is not something I anticipate has taken place.

Conclusion
Mix and match Arsenal team. Home form of the League One hosts. Passionate support. It has all the ingredients for a cup shock. What Arsenal need to do is score an early goal, follow it up with another and then demonstrate their ability to control a game… perhaps teaching the first choicers a lesson in that respect? It should be an away win, but I suspect this tie won’t be as straightforward as we’d all like. A repeat of 2004’s 5-1 would do nicely, and don’t rule it out if Arteta’s team start well. My prediction though is 3-1 to the Gunners, with the third goal coming late.

The currebt issue of The Gooner (282) is on sale from our online store. You can order your copy here (for UK orders) or if you are abroad, order here.