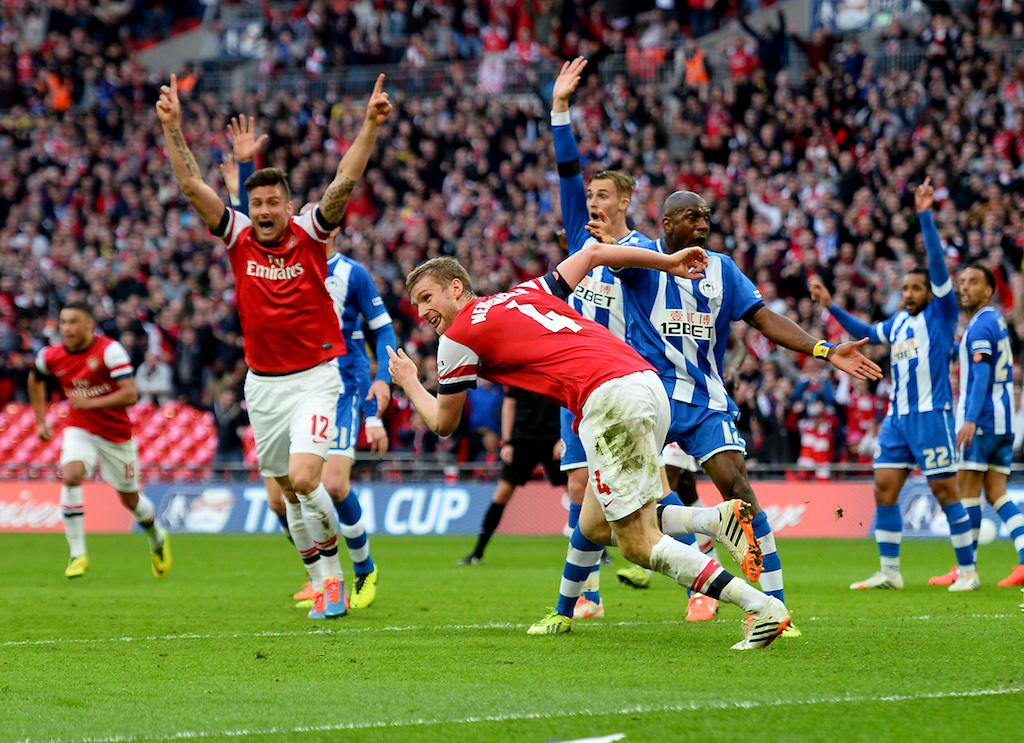 Per Mertesacker pictured scoring the equaliser against Wigan Athletic to rescue Arsenal in the 2014 FA Cup semi-final. 24 hours later loyal Gunner Declan Varley was fighting for his life. Read on for his moving account and for what his club, football and sport mean to him - and to us all. CREDIT: OFFSIDE

And so it has been for me.

And for a lot of us.

April 12, 2014 — a hot sticky evening at Wembley. Shadows across the pitch that had lost its 1970s lure. No bathing in sunshine, no real solace in the shade. The game already rich with emotion because of the 5.19 kick off to remember those who perished at Hillsborough. A game rich with possibilities.

Here we were, the best of the four remaining teams on a weekend of semis. Victory should have been inevitable but we went a goal behind…and suddenly everything turned greyer, the stadium darker. The red shirts a blood red reminder of the '72 final. No longer the theatre of Charlie George or Marc Overmars or Alan Sunderland, but a dull ugly arena. Every Arsenal fan turned cranky. Little niggles broke out around me. Mostly of the ”what you looking at mate?’ variety.

This was going to be it, the end of Arsene Wenger, the best chance in a decade (Birmingham aside) to break that duck, to get winning again….gone, chucked away…..until Per Mertesacker stooped low and saved us.

The 19-minute delay, the tension, the draw, the extra-time, the penalties, meant I headed for my hotel at Stansted much later than I had expected. Drained from it all, and when I boarded my redeye for Shannon Airport at dawn, the strain of it all stayed with me, despite our qualification for the final.

Battling for my life

Less than 24 hours later, I was battling for my life, having picked up encephalitis, a viral infection of the brain. A plane-borne virus that preyed on my weakened will. And for a month, I fought mad hallucinogenic visions in the High Dependency Unit of the hospital in Galway, not knowing that doctors had given me a two-per cent chance of a full recovery.

I stared at the ceiling wondering what was real and what was not and if we had qualified for the cup final at all and would I be well enough to even see it. And then when I tried to walk, my legs gave way. When I tried to write, I held the pen just above the paper and made the gestures but no words. For a month, I was felt I was housed not in the sickest room in hospital, but in IKEA.

On a small TV in the corner of the room, I watched the Steven Gerrard slip against Chelsea and knew that moment had brought my subconscious damaged mind some joy, so football must have been linked to my state of purpose. I learned to walk again, dragging a foot every few steps. I began to recognise everyone important to me. A few weeks later, a pale, skinny version of myself watched as Kieran Gibbs cleared what should have been Hull’s third goal off the line before that famous comeback. And that summer, I spent rebuilding myself, through walking and then running and emerging fitter and leaner than I had ever been.

The ballet of the masses

My rebooted brain and topped up immune system saw me write several books and get back to work as a newspaper editor before the autumn. And yet, from this remove, I can still feel the oppression of that Wigan semi-final and the power of football to impact our health and our outlook. The ability of what Shostakovich called ‘the ballet of the masses’ to manoeuvre our wellbeing.

For almost five decades, Arsenal has been a key decider of my state of mind.

From the disappointment against Ipswich and the victory against Manchester United in a team that contained six Irish players, the travails of the club shaped my moods.

I can still feel the pain from losing to West Ham in 1980.

We had no understanding then of the cumulative effect of exhaustion. We loved playing football every few days, so why shouldn’t our team? But for 70 games? The secret was there on the Saturday when Trevor Brooking broke our hearts. But we had one more chance. In the not yet infamous Heysel Stadium. We crowded into our friend’s house to watch the game, a terrible one, dour and patchy with only one chance going our way. And when the two penalty takers we were sure would score (Chippy and Kempes) both missed, we knew we were set for more disappointment.

2004 should have been our year in Europe

On a Tuesday night in 2004, when I knew we were the best team in Europe that season, well capable of beating anything left in the Champions League, Wayne Bridge broke our hearts. Afterwards, I took to the darkest road I could find to run and sob my eyes out, knowing then that we might never have a greater chance to be crowned Europe’s finest. Well, until Thierry Henry fluffed his two years later, but even Paris was not as disappointing as the Chelsea game.

Arsenal in the blood

My exam years in school were dominated by Arsenal performances. I still have cassette tapes of the Radio Two commentary on that extraordinary League Cup defeat by Swindon when we scored a hat trick of own goals to lose in a thriller that lasted two hours, on a night when I should have been studying. Another time, I recorded a record blood pressure high after watching us play Barcelona at Wembley in 1999.

Football moves us. For good and bad, and now that it has disappeared, we are bereft. For those of us who travel by air and sea to watch our teams, we can but dream of banter in the Tolly again; of the match day rituals, of queueing for a Charlie Nicholas pie at Piebury Corner.

Football matters to us because it matters

I wish that a decision was taken to switch off the season and reboot it, not only because it would frustrate Liverpool, but because this season offers us nothing in a footballing sense. Everything is geared towards the summer, seeing it out, and letting Mikel shape the squad the way he wants to.

But will there be a window or a season or football as we know it?

Football has always shaped us, and now an illness can shape football. Unless a vaccine or an anti-viral is found, the behaviour of the masses may dictate if we have its ballet again.

Declan Varley is a newspaper editor from Galway in the west of Ireland and has been following Arsenal since the mid-seventies.