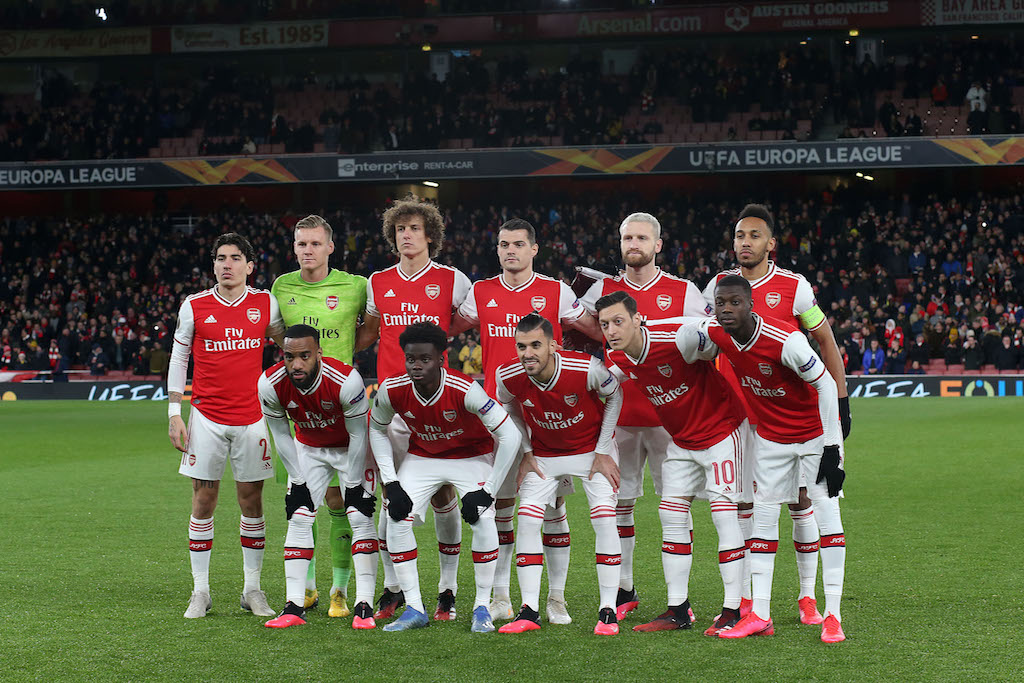 How do you think Arsenal will line-up against Manchester City at the Etihad on Wednesday? Dan Mountney gives his verdict. CREDIT: OFFSIDE

After almost 100 days, the Premier League finally resumes on Wednesday as Arsenal travel to Manchester City. Gooner Fanzine writer Dan Mountney looks at the team Mikel Arteta might name for the game at the Etihad.

One of Arsenal’s standout performers this season, the German is yet to miss a Premier League game in 2019/20 and will likely keep his place between the sticks. Leno will certainly be in for a busy evening against the reigning champions.

After being troubled by injuries before the season was halted, football’s break may have been a good thing for the Spaniard, allowing him time to work on his fitness. He should keep his place and start ahead of Ainsley Maitland-Niles.

Despite a shaky, error-prone display against Brentford in a behind closed door game last week, Luiz has become one of Arteta’s trusted lieutenants and should keep his place in the side to face Manchester City.

Having revived his ailing Arsenal career, Arteta is likely to stick with the German after forming an improving partnership with Luiz in the weeks leading up to football’s suspension.

Despite the impressive performances of Bukayo Saka this season, the youngster was only a stopgap in defence following an injury crisis. With Sead Kolasinac and Tierney both fit again, Arteta may well select the latter after revealing his admiration for the Scot during the lockdown.

Like Mustafi, the Swiss international has turned his career around after a testing start to the season. Improving performances at the base of midfield and a growing influence under Arteta before lockdown could see him keep his place.

After enduring a tough time at the start of Arteta’s reign, the Spaniard forced his way into the team with a string of impressive performances. The Real Madrid loanee’s forward-thinking play could see him play a crucial role on Wednesday.

It’s been an up and down first season in England for Arsenal’s club-record signing, but the Ivorian has shown glimpses of the quality he can bring in wide areas. With City stars Raheem Sterling and Leroy Sane crediting former assistant Arteta as key to their development, Arsenal fans will be hoping to see something similar with Pepe.

While the German’s performances have improved under Arteta, his goals and assist figures remain disappointingly low. Despite this, Ozil will likely be deployed as Arsenal’s main creative force for the trip to Manchester.

Arsenal’s captain will be the first name on the team sheet on Wednesday, and Arteta will be hoping that Aubameyang continues his goal scoring form to push the Gunners closer to the European places.

With the youngster now battling Alexandre Lacazette to lead the line, Nketiah’s ability to find space in behind could see him given the nod on Wednesday. A hat-trick in a behind closed doors friendly with Charlton Athletic will only help his cause.