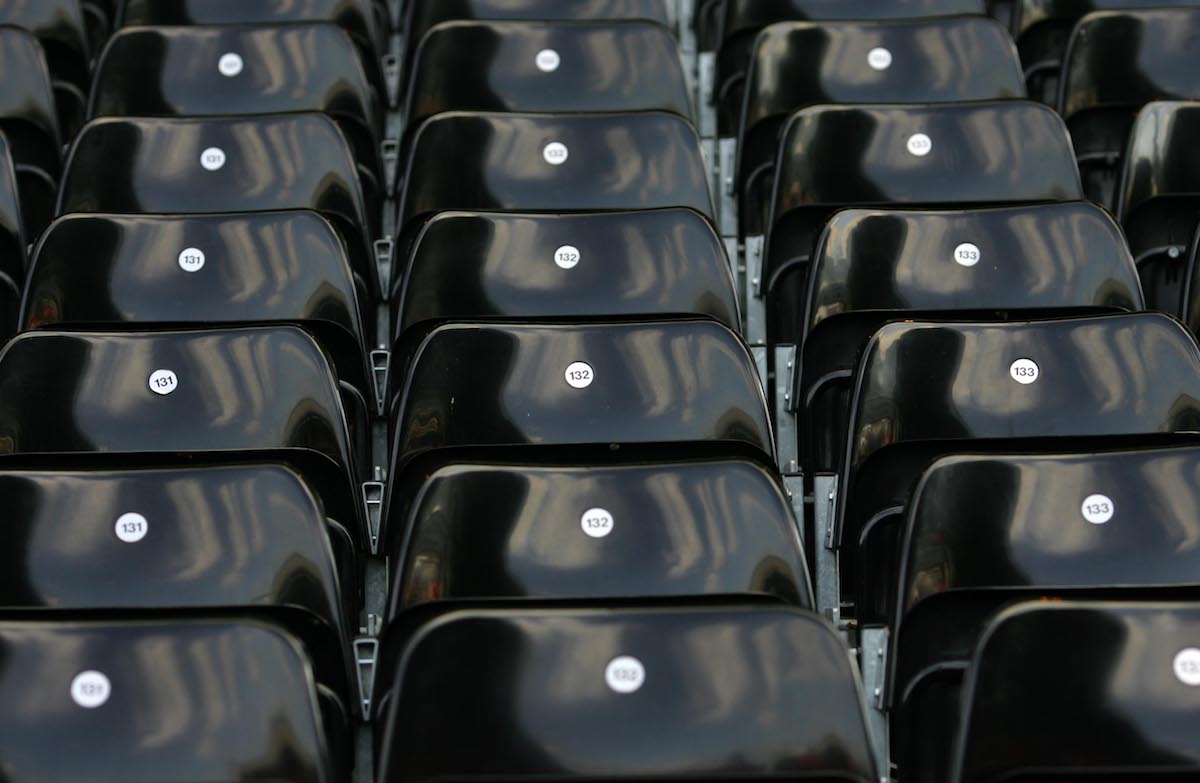 The away end yesterday – an untypical view. Photo: Offside

Firstly, this is taken from my own blog (see link at the bottom) which I have started because a number of people have expressed the wish to continue reading my musings after Arsenal matches, and I quite enjoyed writing them to reflect on events on the pitch. I’ve handed over The Gooner and its website to Layth Yousif, and truth to tell, my offerings would quickly get swamped here and sink out of view due to the sheer mass of content, given the new editor is far more active online than I ever had the time for. I did hope to start this after the Community Shield victory over Liverpool, but most of my time these days is being spent developing my holistic therapy business, which requires more hours than I’d choose, but which I am enjoying nevertheless. As for the blog itself, I’ll tart up the look of it in time, but for now I just want to get it up and running or it will never happen. So with that, onto the reason we are all here…

Fulham away is traditionally a popular trip with Gooners for a lot of reasons, not least the old-style feel of the stadium evoking memories of simpler, and younger times for many. We await to see if fans will be able to attend any matches in the away section this season, but many will have certainly been sorry that the 2020-21 Craven Cottage visit was a behind closed doors match. Still, if you were able to catch the game without fake crowd noise, it was interesting to hear Mikel Arteta’s constant coaching, in three different languages.

Now, of course, promoted teams should, in theory, be meat and drink for clubs who have serious ambitions of competing at the top end of the table. Last season told the truth of how much Arsenal struggled in that regard. The visits to Aston Villa, Norwich and Sheffield United saw the team take one point from nine. Granted, no game in the Premier League, especially away from home is a formality, but let’s be honest, it was a huge relief to win the opener after only securing four wins out of 19 last time out.

There has, of course, been gradual improvement in Arsenal’s performances, especially in particular matches against big teams after the return from lockdown, although defeats at Brighton, Spurs and Villa did expose inconsistency. The break between the conclusion of last season and the start of this one was so short (and of course, the no fans situation continues) that to me, it really does not feel like a new season at all. And in a sense, Arsenal have picked up where they left off.

The starting selection featured two new faces in the form of Willian and Gabriel. The first eleven that Arteta picked for a competitive game was always going to be interesting, although one thing is for sure about the (no longer head coach but) first team manager – he will rotate. There’s no doubt that performance on the training pitch and carrying out his instructions are the two main factors in selection. And that is good. Reputations count for nothing.

On that level, there is understandable dismay over the departure of Emi Martinez, not even on the bench yesterday. For many it is madness, as he has proved to be a match-winning keeper, in the eyes of many an improvement on Bernd Leno. If one has to go, it should be Leno, although the very fact the club are prepared to let either of two decent keepers depart probably says more about their financial position than anything else. Martinez has two years remaining on his current deal, which I am certain is not seeing him paid big wages. Perhaps negotiating an extension will cost too dear if Arteta does see him as the second choice. Arguably, having two quality goalies in the squad is a luxury Arsenal simply cannot afford at the current time. £20 million will at least cover Mesut Ozil’s wages for his final year…

The legacy of Arsene and Ivan is not behind us quite yet.

So Leno got the nod, with Matt Macey in reserve. With Luiz injured, the back three was Holding, Gabriel and Tierney. The new Brazilian centre back nearly had an ignominious start by leaving a ball for Leno that he really should have controlled and taken out wide and then passed down the line. It nearly presented Fulham with a gift. The home side certainly created chances, with more than one ball flashing across the face of goal, just lacking someone to administer a tap-in. So although the clean sheet was a delight, there is work to do.

Regarding the defence, Bellerin and Maitland-Niles played as wing backs, but in classic Guardiola style, both often went forward with purpose and occupied central positions, Holding and Tierney moving into their wing-back positions. Why keep three defenders back when there is only one man to mark? There was genuine fluidity about Arsenal’s players which was a joy to see and difficult to play against, as Scott Parker’s men discovered. At times Elneny or Xhaka would drop to support the defenders behind them as an insurance. There was a lot of evidence of genuine work on the training ground here. Arsene used to trust the players to work it out for themselves (no problem when you have the likes of Adams and Bergkamp in the team, but what followed got very ugly at times). Unai Emery did a lot of work but ended up confusing everyone. Whatever the current incumbent is doing, it seems to be getting through.

The selection of Elneny was down to a mixture of good performances and fitness. One wonders if he can retain his place once Ceballos is fully fit, as the Spaniard offers more drive to the team. There was a bit of a spat between him and Nketiah during the warm-up, but to this viewer it was evidence of a competitive attitude that might not be the worst thing for the squad. They were all pals post game on social media, and both saw some game time from the bench.

Lacazette and Willian started alongside the captain Aubameyang, and both played well enough to justify their selections. Willian got the assists for all three goals and looks like a very good acquisition. Lacazette was in position to finish off the opening goal, and who cares how scrappy it was. It soothed the nerves and Arsenal never looked back. The club have brought in a corner specialist from what I have been told (and honestly guys, I am getting my Arsenal news from friends on WhatsApp these days, so don’t expect too much from me other than match opinion going forward) – and if he is working on attacking corners, he would have been well pleased with the second goal. A very well placed cross from Willian was met by his compatriot Gabriel who got enough on it to send it across the line. Aubameyang’s goal in the second half was a beauty, the icing on the cake of a solid performance.

We saw committed pressing, excellent shape, some meaningful tackles and good team spirit. At times, when Fulham had the ball in their own half, the hunting in packs was reminiscent of Guardiola’s Barcelona of a decade ago. The team can go a long way with this sort of approach to matches.

Granted, first game of the season, and some stiff tests ahead before the clocks go back at the end of October – specifically the next three away matches. But it was vital to start off with three points and if a home win against West Ham can be secured next weekend, then there is every reason to feel the team are developing consistency as well as general improvement. No-one could be certain Arteta would work out, and although it is still early, people are starting to see something a bit special, his reputation within the game before he left Manchester seeming to be justified. He is working under challenging circumstances, no doubt about that, but he is making the best of it. And more than anything, it feels like genuine hope is returning.
Last season was a car crash on many levels, but one that ended well with a trophy that ensured European qualification. Just at the moment, it feels like an upward curve. Long may that continue.

To be notified when there is fresh content on my blog (and in truth that will most likely be the day after matches, but there you have it), follow me on Twitter - https://twitter.com/KevinWhitcher01.

I will also be contributing a couple of pages to the print version of The Gooner each issue over the coming season. Subscribe here if you haven’t already (first issue out in early October) - https://shop.onlinegooner.com/index.php?cPath=30

As for the blog itself – that can be found here - https://kevinwhitchersarsenalblog.blogspot.com. The first handful of pieces will be posted here for the awareness, but long term, the blog will be where to find my pieces in the event that you have any wish to read my own take on events at Arsenal.