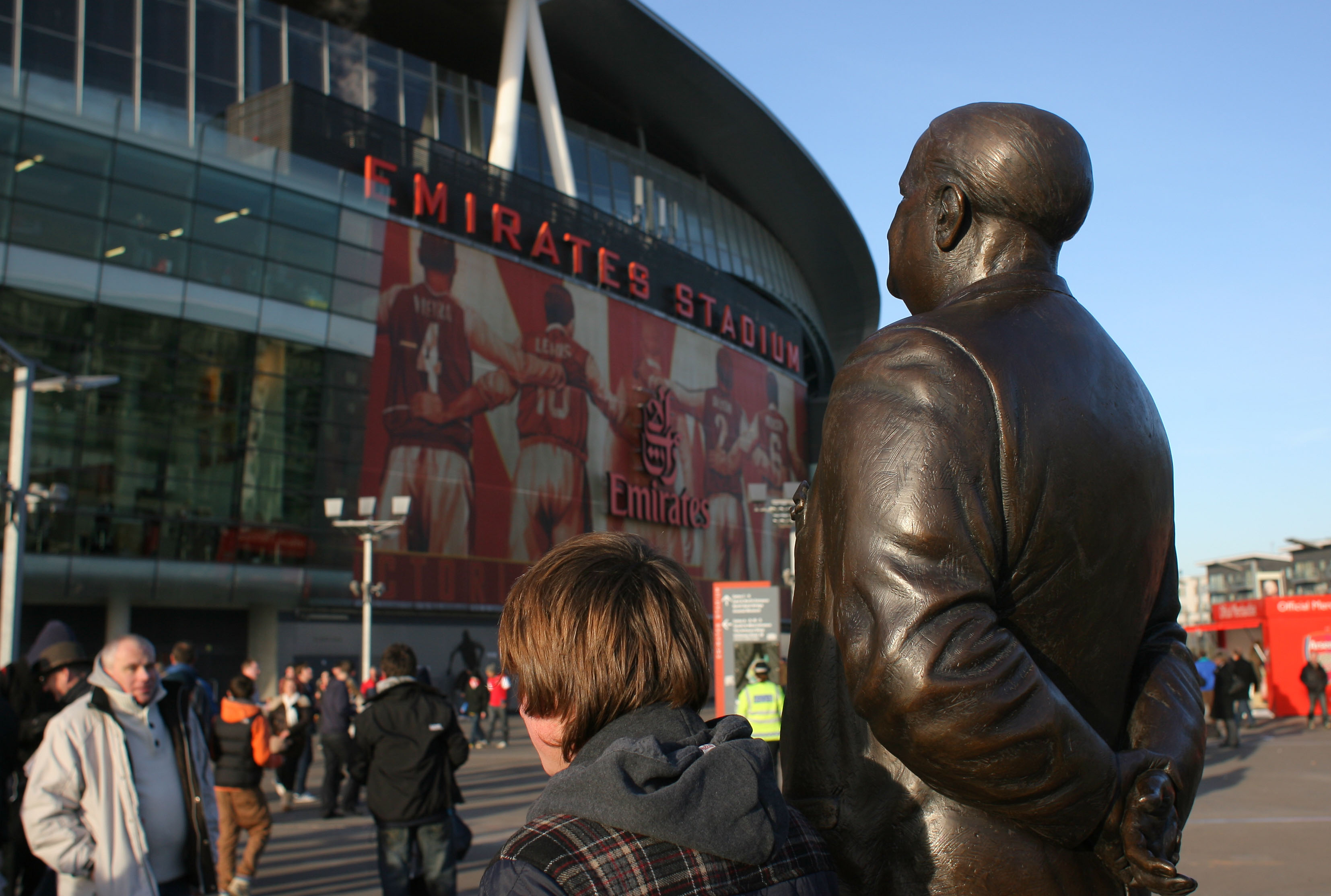 If you're looking for the definitive book detailing Arsenal's legendary boss then look no further than Paddy Barclay's The Life and Times of Herbert Chapman – The story of one of football’s most influential figures.

Paddy spoke with Layth in depth about Chapman for a feature in our printed issue in back in January 2014. Unfortunately we can't locate the orginal Q&A as it never went online, but to mark his passing here's the Gooner Fanzine's detailed review of the book from six years ago.

Ashburton Grove otherwise known as The Emirates Stadium has three statues surrounding it. On match day, two of them are normally encircled by a throng of eager guests, who jockey good naturedly for prime space to chronicle their association with these bronze representations of true Arsenal servants – Thierry Henry and Tony Adams - normally through mobile phones which capture a plethora of red and white, and wide smiles. The other cast, a solitary figure, characterising a man who appears dignified, almost avuncular in bearing with a kindly expression, is almost invariably untenanted.

How many thousands of visitors walk unthinkingly past this great man’s figure on the way to our new homeland, only meters away from the plot of land where the figure was instrumental in laying the foundations of the club millions know and love today?

Patrick Barclay’s superb new book on this working-class visionary from humble mining stock in Kiveton Park, Yorkshire entitled: “The Life and Times of Herbert Chapman – The story of one of football’s most influential figures” is destined to be the definitive volume on the great man.

Yet Barclay’s account is far more than a mere retelling of Chapman’s deeds, substantial and influential as they were. It also stands as a mesmerising account of a harsh age treated with tact and sensitivity which becomes essential reading - not only for fans of Arsenal, Huddersfield & Northampton Town but for students of football history, and social history. Yet, to paraphrase the great West Indian CLR James, what do we know of the statue who the statue only know? This visionary man called Herbert Chapman.

Thanks to Barclay’s meticulous research we know that he instigated football in the community schemes 50 years before they were officially adopted by the club; that he was one of the pioneers of the use of physiotherapists and masseurs; that he encouraged his players to analyse tactics; that he instigated team meetings; encouraged socialising to build team spirit; initiated matches with continental opposition, proposing a Europe wide competition nearly 30 years before the European Cup was founded, and looked to buy top quality foreign players who also turned out for his friend Hugo Meisl’s Austrian Wunderteam – even if the FA prevented him from doing so.

We also know that he was an early advocate of floodlights and radio broadcasts, was instrumental in having Art-Deco stands built as part of a stylish and comfortable new ground, installed a clock to aid players and fans, helped design the scoreboard and turnstiles at Arsenal and even persuaded the forerunners of London Transport to reprint copious amounts of maps and tickets in making them change the name of the nearby tube station to better represent the club. We also recognise he numbered shirts for better identification (again something the FA turned down at the time), and was the man who designed the classic style of kit that every Arsenal fan on this planet has worn at some stage of their life. He even promoted the use of a white ball and started the tradition of both teams walking out together at the FA Cup Final – due to his involvement with both clubs involved namely the Gunners and Huddersfield – a tradition which has continued ever since.

And we learn that he melded tactical changes with his own ideals on counter-attacking football with fast wingers and a solid defence. Chapman himself summing it up by saying: "the most opportune time for scoring is immediately after repelling an attack, because opponents are then strung out in the wrong half of the field." Quite simply if you love football you’ll love this book. But there is so much more to it than that.

Characters and incidents from the games early years are narrated by Barclay with a telling that Dickens would have relished. Always mindful of the social context, some of the matter-of-fact horrors of pit life, far from sensationalising the text, generously place the success of Chapman and the lives of many of his contemporaries in a far greater triumph because of the unrelentingly tragic nature of the era. Personalities such as the “darkly charismatic” Bill Sudell leap to life in perfectly crafted prose. There are vignettes on Preston’s Arthur Wharton, the first non-white player in English football.

Major Francis Marandin, Crimea War veteran and FA Cup Final referee six years in a row in the mid 1880’s appears in a cameo as an individual as outlandishly improbable as he is strangely captivating. James Calton, the first football journalist is introduced, of whom Aston Villa once players threatened to throw out of a window – thereby establishing a lineage that runs to this day of players angry with reporters.

We are even treated to the delightful supposition that Edward Elgar,- composer of Land of Hope and Glory – and a big Wolverhampton Wanderers supporter – was so taken with a match report he set a phrase to music – ‘we banged the leather for good’ - so legend has it, thereby becoming the first ever terrace chant.

We are also informed that a certain Mahatma Ghandi was a stretcher bearer during a battle to take a hill near Ladysmith in South Africa during the Boer War – the hill of course being forever known as the Spion Kop.

References to Queen Victoria, Jack the Ripper, Dr Crippen and many others make this a comprehensive and majestic study of a turbulent era. Even mention of the Thames overflowing up to the moat at the Tower with 14 unfortunates drowning during one particularly wet winter is sinisterly spellbinding information.

Barclay excels at recounting the tragedy of the First World War on an individual level, faithfully retelling the account of many of the brave lads from the ‘Footballers Battalion’ – known in military terms as the 17th Service Battalion (1st Football) of the Middlesex Regiment. A regiment in which 500 of its 600 members were dead by the early 30s. The story of the ill-fated Dick Roose is revealed with a sobering panache. A goalkeeper who played for Sunderland, dated flamboyant music hall dames of the age and was the first man to enact Grobbelaar-style wobbly legs ahead of a Manchester City penalty - who having saved it using the trick “raised his arms in glee to the City support, who”, as Barclay dryly recounts “pelted him.”

Like many millions of lives at that murderous time there is no happy ending. George Holley a man who Roose had played with at Sunderland received a letter from him posted during the dreadful Dardanelles’ campaign in Gallipoli, where the ex-keeper who readily volunteered for the war effort wrote plaintively: ‘If ever there was a hell on this occasionally volatile planet this is it.” As Barclay described with feeling: “Roose may have revised this definition at the Somme the following year, before he too died a hero.” Charlie Buchan a name that was to feature large in Arsenal history in the post war years ran the Grenadier Guards team in Northern France – with Barclay calmly noting that they once “changed pitches after a shell landed next to their original venue”.

The Somme also took away the life of Clapton Orient’s Wille Jonas who was killed going over the top. His last words to teammate and boyhood friend Richard McFadden were heroically moving in their simplicity, kindess and loyalty: ‘Goodbye Mac. Best of luck, special love to my sweetheart Mary Jane and best regards to the lads at Orient.’ It was reassuringly ironic, but not altogether surprising Chapman ran an Arsenal during the War – a real Arsenal, as the Woolwich Arsenal itself struggled to meet the demand for munitions required by those brave lads at the front. Chapman became a senior manager to Barnbow Arsenal near Leeds which employed 16,000 people. Needless to say he increased effort to unheralded levels of output through his sterling leadership.

This fascinating material Barclay has assiduously harvested through what must have been extensive investigation of the game and the era that surrounds it brings to life Chapman far more than accounts merely regurgitating facts we already know. For example we are told Chapman played cricket with his brother in the Kiveton Park Collery League “audaciously stealing runs.” And that a as a player at Grimsby Chapman wore yellow boots - even if it was for practical reasons “rather than a narcissistic ploy” due to the ‘canary leather’, as it was known, being stronger and more durable.

We also learn he eventually secured a “Second Class Certificate as an Under Manager of Mines” after an image of a young Chapman is evoked, pouring over his textbooks and writing up notes by an oil lamp in his lodgings - as Barclay so impishly phrased it: “The time had come to get earnest about the qualifications he would need after those pumping legs gave out and the yellow boots were hung up for the last time.” We are taken through Chapman’s football education too, as he learns the value of meticulous preparation from a tortuous trip to the south coast Southampton from Northampton where they arrived just before kick-off to find his team’s boots were soled for frost when the pitch was muddy. The ensuing 11-0 defeat ensured he would never make the same mistake twice

The strong character of Vivian Woodward is conjured masterfully. A veteran of the Western Front, of whom Barclay wrote engagingly both in the book and in a recent column of his in the London Evening Standard, was a man who won the Football Olympic Gold Medal in 1908 & 1912 before designing the main grandstand for the 1920 Antwerp Olympics. Dare I say it there is a slight thrill from an Arsenal point of view when he writes of Spurs in 1908 that Woodward was at a club “under who ambitious facade lies something between stagnation and decline.” And where a manager left because of differences with the directors leading to a new appointment “that no-one took seriously in the manager’s role.” The uncharitable amongst us may say ‘plus ca change’. The rest will revel in the meticulous and forensic research that is always enthralling rather than overpowering.

Intriguingly there is also mention of Spurs mysterious election from the Southern League to the Football League – despite finishing seventh the previous season – a fact to mention next time your Lilywhite supporting mates mention 1919 and Sir Henry Norris for the nth time. Speaking of which, Barclay unearths real tension between Chapman and Norris, with the iron-willed Chapman coming out on top. Barclay also shows the ruthless side of Chapman by highlighting his removal of a trainer he inherited when he arrived in North London, George Hardy, after he, unasked, issued instructions to a player during a game - much to Chapman’s ire.

However, Barclay also paints a fully rounded picture of the man who made Arsenal great by showing his undoubted pride in his family, quoting his reply when asked what the greatest achievement of his life was: “Hearing that my first son had qualified as a solicitor.” For all his football success, for a man from working class mining stock in a far less socially mobile era, this was an achievement indeed to be proud of.