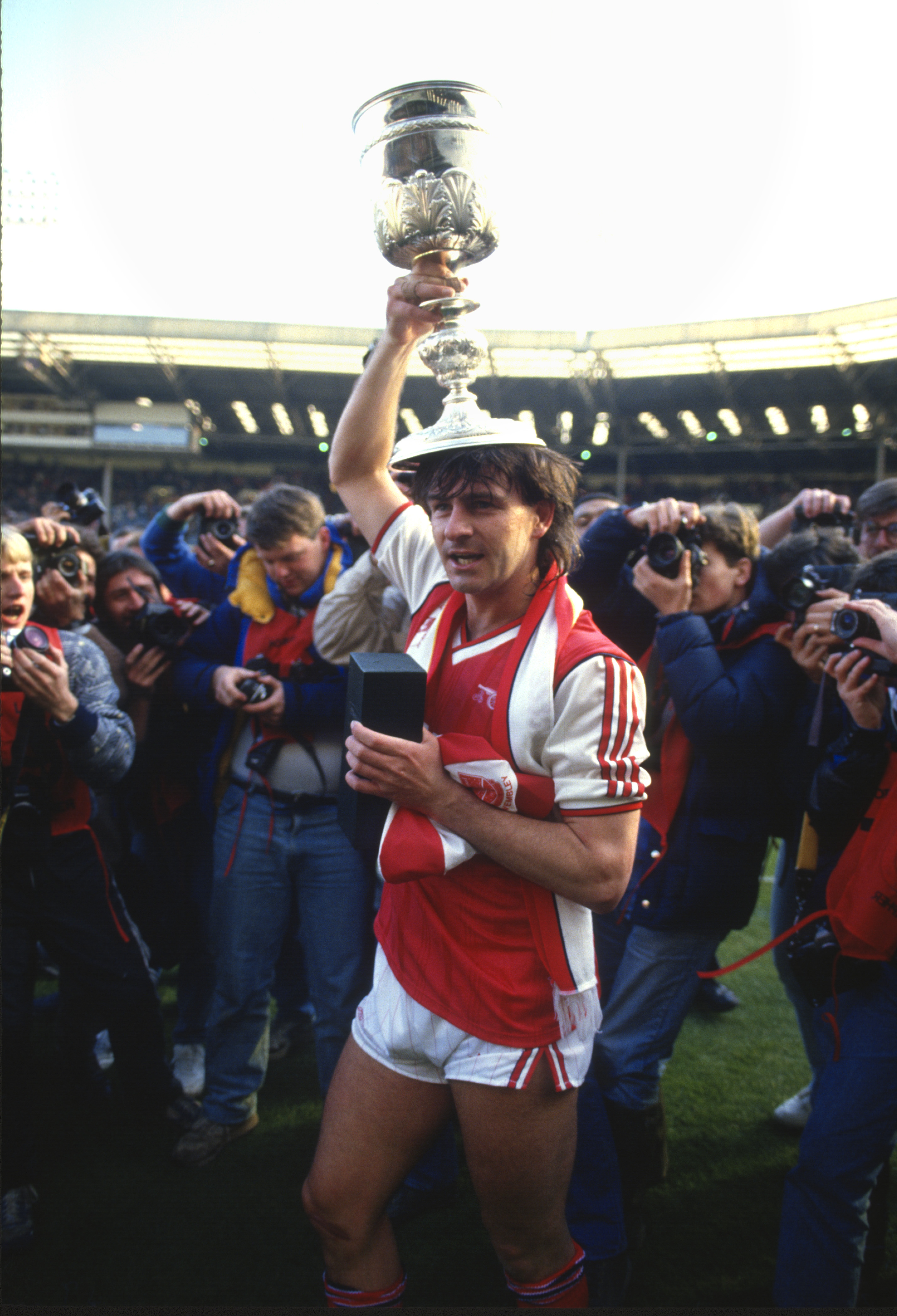 We're delighted to run a new column from a loyal Gooner who used to watch The Arsenal in the 1980s and 1990s, but doesn't attend games anymore.

With the draw for the quarter-final of the League Cup on Saturday morning, here’s the latest piece by our new columnist, View from the Armchair – as he recalls Arsenal’s never-to-be-forgotten 1987 League Cup triumph in the week the Gunners dispatched Leeds in the fourth round.

Read on for View From The Armchair

A confession: I only caught brief highlights of Arsenal’s clinical 2-0 victory over Leeds earlier this week.

I have to admit I didn't see much of Mikel Arteta’s side easing past the Yorkshiremen to reach the last eight of the League Cup Tuesday evening.

I was slightly perturbed – but only slightly – that I was going to miss the game. But miss the game is what happened, because that was how the cards of life fell on Tuesday night.

However, that was ok, because in armchair land, it’s allowed to happen. You are allowed to miss games on your TV.

The positives are that you don’t get abused by your mates for not attending and your wallet doesn’t take a hit.

Nor, as I once again fail to shuffle through the congestion, the crowds, the coughs, the splutters on the way back to Arsenal tube station after a game, the thought of catching Covid is not at the forefront of my mind.

The downside was that I didn’t get to properly watch what a fantastic touch that was from Eddie Nketiah for the second goal.

The view from the armchair of the Leeds game consisted of a two minute bite sized breakdown via YouTube.

I got to see Emile Smith Rowe blaze one over the bar and Calum Chambers nod one in at the back post for our first goal, before the ref really give it his best shot at not allowing it.

But best of all in this micro condensed vision of following the Rip Roaring Reds, I got to see a quite stupendous first touch from Eddie dinking it over the keeper, an equally beautiful second touch to bring it under control, before a fumbled third touch to see it over the line and seal the tie at 2-0.

There was a time where I would have been embarrassed to not be able to tell you what minutes the goals were scored. Not least because I spent years watching The Arsenal home and away in the 1980s and 1990s. But I’m nothing if not honest when I admit I don’t have all the details these days.

I’m just happy that we have managed to continue winning, I’m happy that we got through to the next round, and, despite what the hardcore supporter may or may not think, I’m happy that we still get the chance to potentially lift some silverware in the Milk/Littlewoods/Rumbelows/Carabao cup type thingy.

With the Gunners progressing to the last eight, it brings back fond memories for me of watching Charlie Nicholas score a brace in 1987 against Liverpool. For me and I dare say many others, that season was the launchpad for Anfield 89.

For me, that never-to-be-forgotten game at ‘87 at Wembley was pivotal for all of the success that we were fortunate enough to witness in the flesh in the aftermath of that first, all-important, piece of silverware.

Which brings me back to the present

The League Cup is a tinpot cup is what you might hear from supporters of other clubs.

I beg to differ, it’s one of three trophies available to us this year – and I’ll tell you what I know to be true: Don’t ever underestimate the importance of this team lifting silverware if they do get the opportunity to do so this year.I saw it firsthand at Wembley in 1987.

I can remember very clearly – even now - the deep joy I felt when we ended Rushie’s record of always winning when he scored first.What a magical day that was.

Instrumental in instilling the belief that team would need to kick on and keep on chasing silverware.

Ok, so we need to airbrush the final the following year against Luton from our memories, but at least we got back to Wembley and managed to have another day out on the beer.

View from the Armchair

I can only apologise to you the hardcore supporter who might have travelled from the other end of the country to witness the game against Leeds for my truly woeful assessment of the action contained within.

Anyway, if you really want to know why I missed the game, it wasn’t because I didn’t have a subscription to whatever channel it was on, nor because I was tied up with work. Well, I was in a way.

The reason I missed the game on TV – from the comfort of my armchair if you will – was because I was fitting a fish tank for my sister, who is a 28 mile drive away, via  single country lanes.

To be fair it was a nice little fish tank and I felt vaguely virtuous for a moment after my (little) good deed for the day.

Anyway, over and out, must try harder, I promise to watch the upcoming Leicester match in full and will report back in due course, watch this space, come and interact with me on Twitter, all views are welcome including giving me some stick if you feel the need.

Last little point I want to make. Don’t ever forget. Those that are nearer the action – and those that make the effort to watch every minute of every game from wherever you are in the world - you are the true heroes.

Now, if I can only sort the new fish out for my sister’s new fish tank before 1230pm on Saturday lunchtime it will be a sight to behold.

Even if it won’t be as good as Eddie’s touch that set up the second goal against Leeds.

PS My guilty pleasure this week was allowing the little boy inside me (as someone once said) to have a chuckle at Liverpool spanking five past United. You'd need a heart of stone not to laugh...