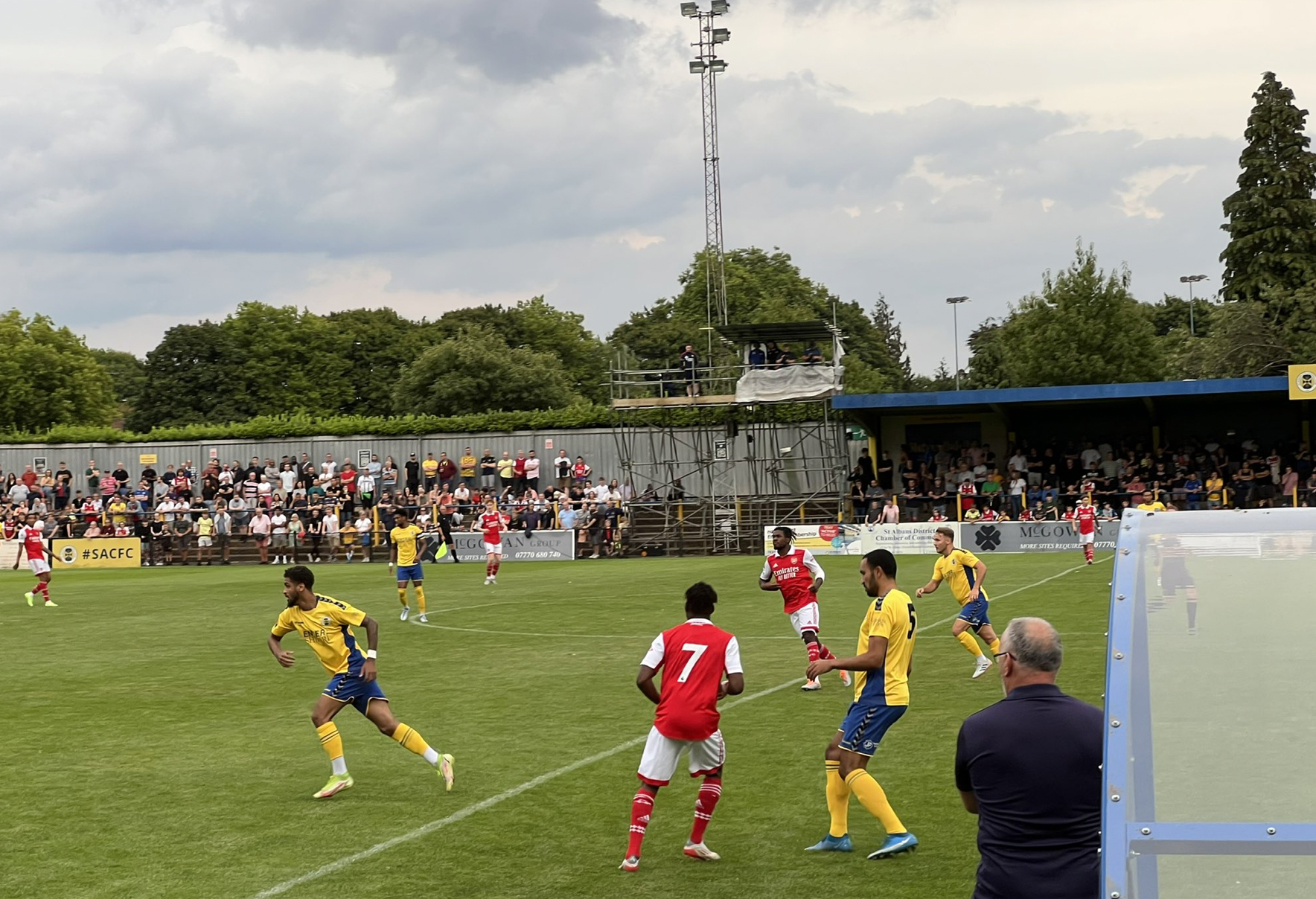 A spectacular long-range strike from Joel Ideho sealed a hard-fought 1-0 victory for a young Arsenal XI over St Albans in front of 2,601 at Clarence Park on Monday evening.

James Hillson: 7.5/10 - Stood up well to deny onrushing St Albans attacker Shaun Jeffers one-on-one after Bradley Ibrahim’s sloppy header sent the Saints’ attacker through on goal. Replaced by Ton Smith at the break after a good first half showing

Henry Jeffcott: 8/10 - Made an appearance against Boreham Wood on Friday and has continued his progress by appearing in the backline against the Saints. Tenacious with an excellent attitude allied with application.

Taylor Foran: 8/10 - Good to see the big No4 feature in the starting XI here at Clarence Park. He’s another Young Gun who featured at Meadow Park on Friday during the 3-2 defeat by Boreham Wood, when he replaced Zach Awe. A good organiser who is vocal. Not a bad turn of pace for a centre-back

Bradley Ibrahim: 6/10 - Sent off at Hendon earlier this month and failed to impress against St Albans. A sloppy header  could have resulted in a goal for the home side had keeper Hillson not been alert. Needs to cancel out the noise and concentrate on his football

Tim Akinola: 7/10 - An intelligent player who sits in front of the backline as a reliable, metronomic presence

George Lewis: 7/10 - Good to see the Kigali-born right-footed attacker feature in the starting XI. Joined to fanfare from Norwegian side Fram Larvik during lockdown in the summer of 2020. Injuries and form have stalled his progress but having turned 22 in June he will know that he simply has to make sustained progress this term

Mauro Banoeira: 7/10 - Impressed during his cameo appearance at Boreham Wood but found it harder to make an impression after starting agains the Saints. Will be better for the experience against seasoned non-league defenders who know all the tricks – and how to combat them

Kido Taylor-Hart: 7.5/10 - On the end of a few hefty challenges as befits someone as talented as the 19-year-old left-winger

Ben Cottrell: 6/10 - Forced to depart midway through the first half after a heavy knock. Let’s hope he’s ok as he’s had bad luck with injuries in the past.

Joel Ideho: 8/10 - Offered a lively presence in the No11 while also putting in a shift defensively. Scored a spectacular long-range goal from near the halfway to put the Young Guns ahead in the 69th minute

Catalin Cirjan: 7.5/10 - The 19-year-old Romanian midfielder replaced injured captain Cottrell. With his deal running until 2024 with an option for another year, he’s another player looking to impress this term. Hit the woodwork with a second half free-kick

Tom Smith: 7/10 - Replaced Hillson in goal during the interval