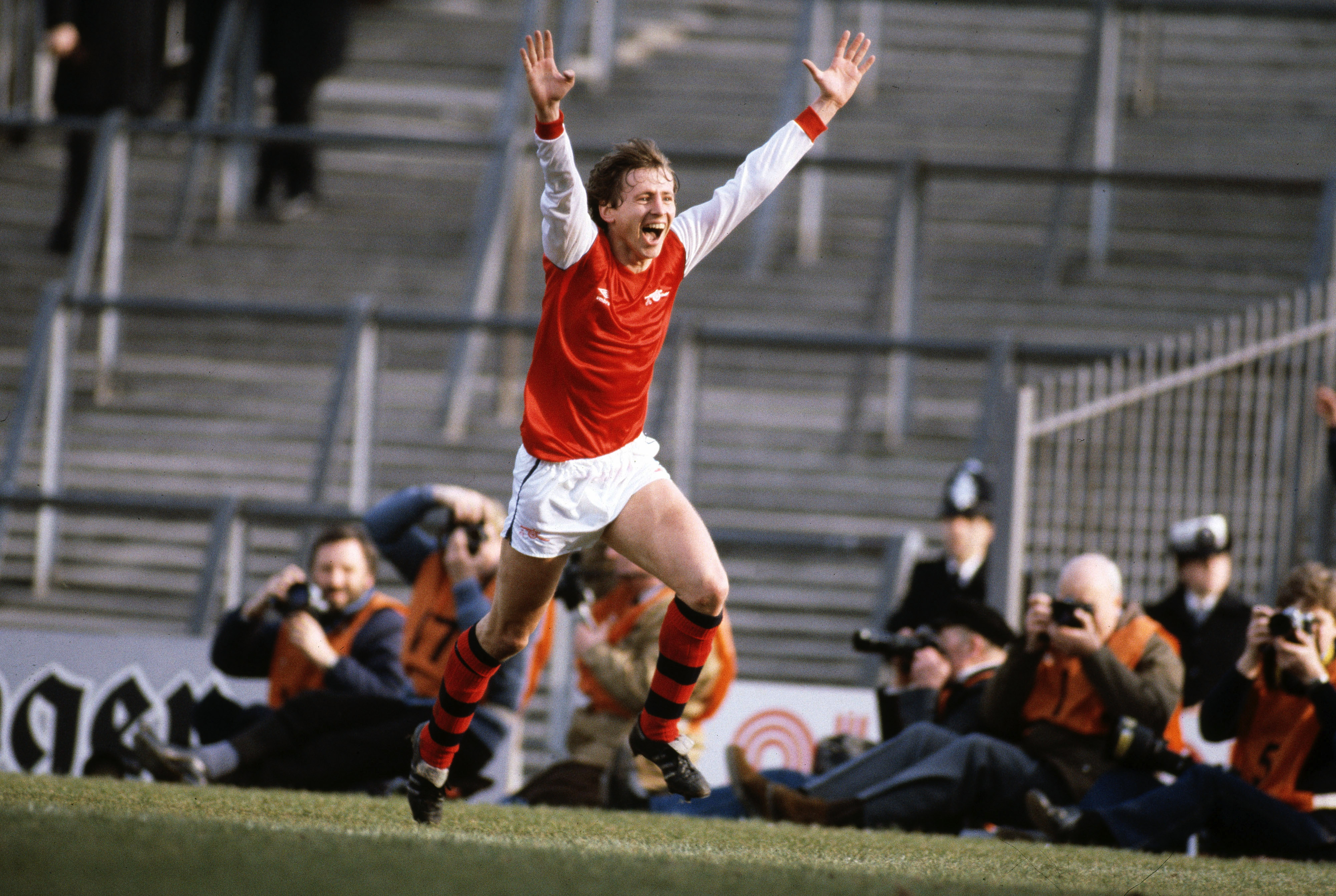 A recent question on social media asked me to name the player whose time at the club had most disappointed: my immediate response then, as it would have been at any stage of the preceding 39 years, and will in all likelihood remain so for the next 39 years, was Vladimir Petrovi? – and disappointed doesn’t really do justice to the emotional turmoil and heartbreak I felt when the little man from Belgrade, who looked every inch like a cool French actor from a black and white New Wave film was deemed too great a luxury for the culture of ‘industrial’ and functional football which prevailed in England in the early 1980’s.

‘Vladi’ was adored by me and I think by most Arsenal supporters; a time-travelling footballer who came to Highbury 20 years too soon. His game was a very public love affair with a football and a microcosmic harbinger of the breath taking and shimmering football which would gild the trophy haul of Wenger’s Arsenal. To imagine Petrovi? in a team alongside Pires, Bergkamp, Henry, and Vieira is to dream a dream of such beauty that neither the human mind, nor perhaps even the soul, could ever conceive of it. In 1983 such a dream was as remote as the depths of space and even less comprehensible.

Yet we all have one day to remember him by, one small hook to hang his coat of many glorious colours upon, namely 12th March 1983.

Following a protracted summer of transfer talks and negotiations, Petrovi? returned to Red Star from Arsenal’s summer training camp when the Yugoslavian authorities refused to waive their ruling prohibiting nationals from playing abroad until after their 28th birthday. Petrovi?, 27, though turning 28 during the new season, had expected to be allowed to join Arsenal, but no, and it seemed that as Terry Neill’s search would continue, out of necessity, for a creative spark in midfield, so sorely and obviously missing since Brady’s departure, his chance had gone. However, the Yugoslavian authorities had a sudden change of heart half way through the season and a loan deal was arranged with Petrovi? moving to north London for £40,000 until the end of the season, with an option to make the move permanent in the summer.

Petrovi?’s arrival initially gave everyone a lift, he had proved a popular player during the summer training camp, but by the conclusion of only his second game, a 3-1 defeat at Anfield both Neill and Howe were having doubts about his durability and suitability for the physically robust and testing environment he know found himself in. By the middle of March Petrovi? was out of the team, dropped after the second leg of the Milk Cup semi-final at Old Trafford, a 2-1 defeat (following a humbling 4-2 defeat in the first leg eight days earlier). With Arsenal down in 15th place in the table, a season of mediocrity might only be saved by continued progress in the FA Cup.

On 12th March Aston Villa, the reigning European Cup holders would visit Highbury in the sixth round of the Cup. A week previous Arsenal had ‘entertained’ Nottingham Forest at Highbury in a soulless and goalless draw, a performance for which Neill felt a public apology was due, and it seemed that the experiment with Petrovi? was dead and buried. There had never been any doubt about his technical ability or his football intelligence, but he simply didn’t seem equipped for the pace and aggression of the English game: what was always a suspicion at the start had grown swiftly and conclusively into an irresistible argument.

On the Friday before the cup quarter-final Neill admitted he was still to settle on his starting XI. Most thought his thinking concerned whether he felt O’Leary was fit to return, or if young Stewart Robson should deputise as a makeshift centre-back. No one thought for a moment that Neill’s thinking included Petrovi?.Yet when the teams were announced the Yugoslav was back in, perhaps for one last hurrah. Given what rested on the game for Neill, it was a brave decision to leave out the steady Talbot to make space for the unpredictable Serb, but it proved to be his masterstroke.

Petrovi? undoubtedly possessed the ability to turn a big game on his own, and this was now Arsenal’s biggest game of the season. With Peter Nicholas and Paul Davis taking a strangle hold on midfield Petrovi? proceeded to give his most assertive and eloquent performance in an Arsenal shirt. ‘Classy Slav is the star’ shouted the press the following day. His touches were assured and his passing progressive and questioning, with a willingness to get forward and into the box he became single-handedly a great foil for the Sansom-Rix-Woodcock axis going down Arsenal’s left. Indeed, Woodcock scored the first following a cut back from Sansom. Then only minutes later, a ball in from the right from Hollins was stepped over by Sunderland and Petrovi? surging through the Villa defence, took the ball with his first touch into the only patch of space amidst the hurly-burly and steered a right foot shoot inside the far post to put the Gunners two up. The image of him running away arms aloft has become iconic; the delight of his teammates is palpable when nearly every outfield player ran to hug him; his smile is the smile of pure, almost childish delight – whatever Vladi, we’ll always have that moment!

Arsenal won 2-0 and secured a place for their seventh semi-final appearance in thirteen years, where they would lose 2-1 to United once again. Petrovi? would only start another six games after the Villa match and at the end of the season would once more travel home to Belgrade, condemned to be thought of as forever surplus to requirements.

In truth poor Petrovi? was unlikely to have ever gained a foothold in the English league. Our domestic distrust of footballing cleverness and technical excellence back then was laid bare in his being kicked and bullied out of the game time and time again. Villa was his apotheosis in an Arsenal shirt, but even then, his isolation stood out as Arsenal instinctively drifted left in their attacks. Frequently the nearest free player to him was Peter Nicholas, who, though acting as a minder to him, possessed little of Petrovi?’s own footballing ideology. Despite it being dispiriting for Petrovi? he never visibly conceded the fight for light over dark, constructive progression over the unbridled instinct to get the ball forward as efficiently as possible. Eventually he must have been seen as a brake on the side’s desire to attack swiftly and directly. But we all saw something, perhaps we all the saw the future?

After leaving, Petrovi? is said to have received many, many letters from disappointed Arsenal supporters, some of which, he said, made him cry in their kindness and generosity of spirit. Eventually, we must say that English football missed him more than he missed English football. For season after season Neill had endeavoured to make that great marque signing of a European talent, something different to what we saw here week in week out. I thought Petrovi? was the answer, but his talent was out of place, out of time.

Early in his first game for the club, he received a ‘welcome to England’ tackle and that treatment never really abated thereafter. However, he was a smashing player, a beacon of constructive progression who rarely gets a mention these days – but perhaps there is a reason for that, I accept. He left little tangible trace on domestic English football, but he pointed the way: he was the first distant note of what followed 20 years later as assuredly as the cuckoo is of spring.

The early 1980’s was a dour time at Arsenal, but fleetingly that little Slav had lit up the place like a firework, he didn’t shine for long, but when he did his football shone with an intensity that perhaps was only matched by his smile after scoring against Villa. 1983 feels a long time ago, but the sadness at his leaving has never quite gone away.