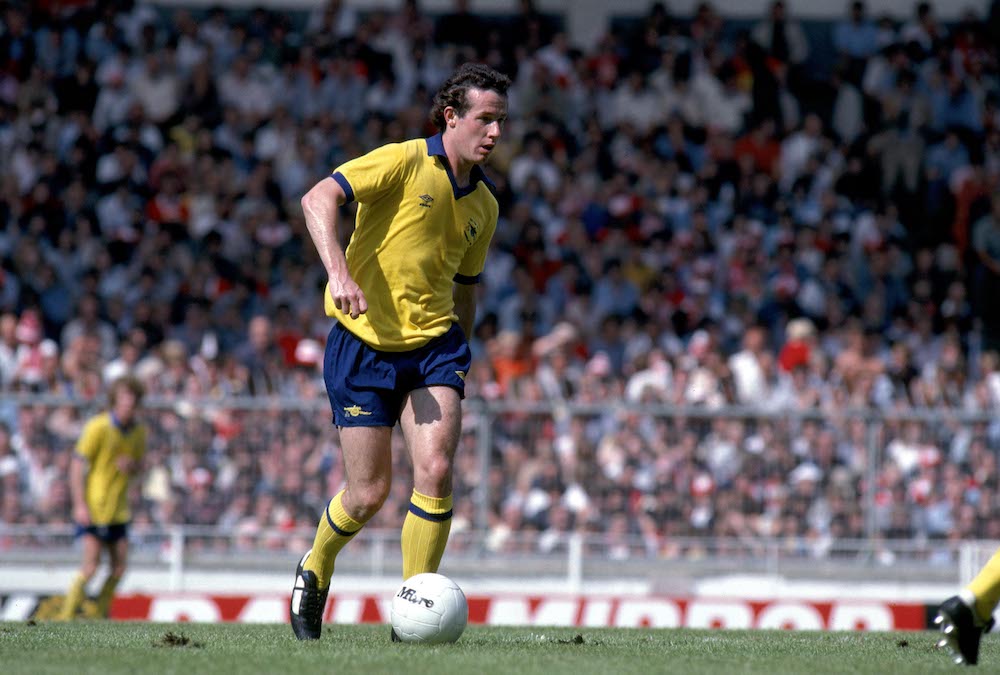 “The yellow shirt has such psychological blood split on it, it has become to signify a battle honour”

A decent football shirt these days is probably as rare as a player playing for the pure and simple love of it, and the badge adorning it, just above the heart. As a kid, growing up, I all too easily accepted we had both, in abundance and took it for granted we always would.

My first game was Arsenal v Leicester City in 1973, a 2-0 defeat: my abiding memory of the day though was the classical beauty of the Arsenal shirt. Of course my bedroom walls were covered in pictures of it and the players who wore it, but to see it in the flesh was a revelation; photos didn’t do justice to the blood red, nor the thin white band around the top of the sock, which some players chose to fold under – Ray Kennedy for one, then later Brian Talbot, Alan Sunderland, and Kenny Sansom. I wanted to do this too in the back garden but it felt slightly sacrilegious. The yellow away shirt was perhaps even more revered by me on the grounds that for all the big games I experienced during those formative years of youth it was the yellow and blue kit we wore: the cup finals of 1971, 1978, 1979, and 1980. Of course it was the good old yellow in which the Bermondsey boy, Paul Vaessen sent me mental with joy listening on a transistor in my bedroom: “Vaessen at the far post, he’s done it, Arsenal have scored in Turin”; a joy which turned to despair three weeks later in the same shirt in the final of the European Cup Winners’ Cup: that shirt has such psychological blood split on it, it has become to signify a battle honour – a regimental flag blown to ribbons upon some Elysian field of war.

The first big game I attended coincided with another outing for the yellow and blue kit: Arsenal v Orient in the 1978 Cup semi-final, a cracking day out. I’d worried for weeks over the threat posed by Orient striker Peter Kitchen: but on the day big Willie Young had him in his pocket and on the underground after the game the carriages rocked to the strains of, “Peter Kitchen walks on water, everybody knows that dog s**t floats”. Although we only wore it for one season, that particular yellow and blue was my favourite, the one with the massive cannon in the middle of the chest, where nowadays the awful scribble of sponsors’ names besiege football’s heritage and dignity.

I liked these little innovations: the big cannon, and then in the next season the addition of the AFC in three separate circles beneath the gun part of the cannon, plus the badge appearing on the shorts too. Growing up I’d been quietly envious of Leeds United’s sock tassels upon which the players’ number was printed presumably for anyone not able to read the enormous number on the back of the shirt!

By the eighties we had begun to become accustomed to sponsors, and although I loathe them, I admit I became reconciled to the JVC legend, in time I accepted it as part of the shirt. I was a bit taken aback by the green and blue away shirt in 1982/83, causing as it did a hiatus for the yellow shirt, but again in time I’ve oddly grown to be very fond of this shirt, but at the time was delighted we reverted back to yellow and blue, especially in time for the centenary season.

Since then we’ve had some revolting shirts: the bruised banana whilst since becoming a retro classic I thought frankly hideous at the time and beneath the dignity of the club. The yellow and blue number worn at Anfield ‘that night’ was a shirt fit for champions though: as a kid I’d always thought that the away kit should look like the home shirt but in yellow and blue: fitting that such a special night occurred in just such a design.

One of my few letters to the club was prompted by news in the mid-1990s that the new home shirt had ditched the white sleeves, as it happened white appeared but merely as a thinnish band down the outside of the sleeve – it was no wonder it turned out to be an awful season – don’t mess with the gods of Arsenal past.

Nowadays I await with trepidation the release of the several new kit designs which appear each year: first, second, third kits, cup kits, endless fodder for the ceaseless appetite of commercialism.

Highbury has gone, the badge has gone, the once iconic Arsenal kits have gone, is there anything left of my Arsenal? And why don’t goalkeepers wear green shirts and retain the rest of the kit worn by the outfield players anymore?

Perhaps life is too short to worry about such things? Okay, see you at the club shop to buy the new shirt in June!

We can't finish without taking the opportunity to plug the campaign to raise 1,000 advance subscribers so that The Gooner fanzine can continue printing next season. Yesterday evening, we were up to 750, but need the remaining 250 signed up by the end of Saturday evening. This deadline is so that, if we fail to make it and the final issue of this season is to be the last ever, we want to be able to say goodbye properly.

So here are all of the Payment options for those that do wish to subscribe for next season and be one of the 1,000 required to keep us printing…

Thank you for your support