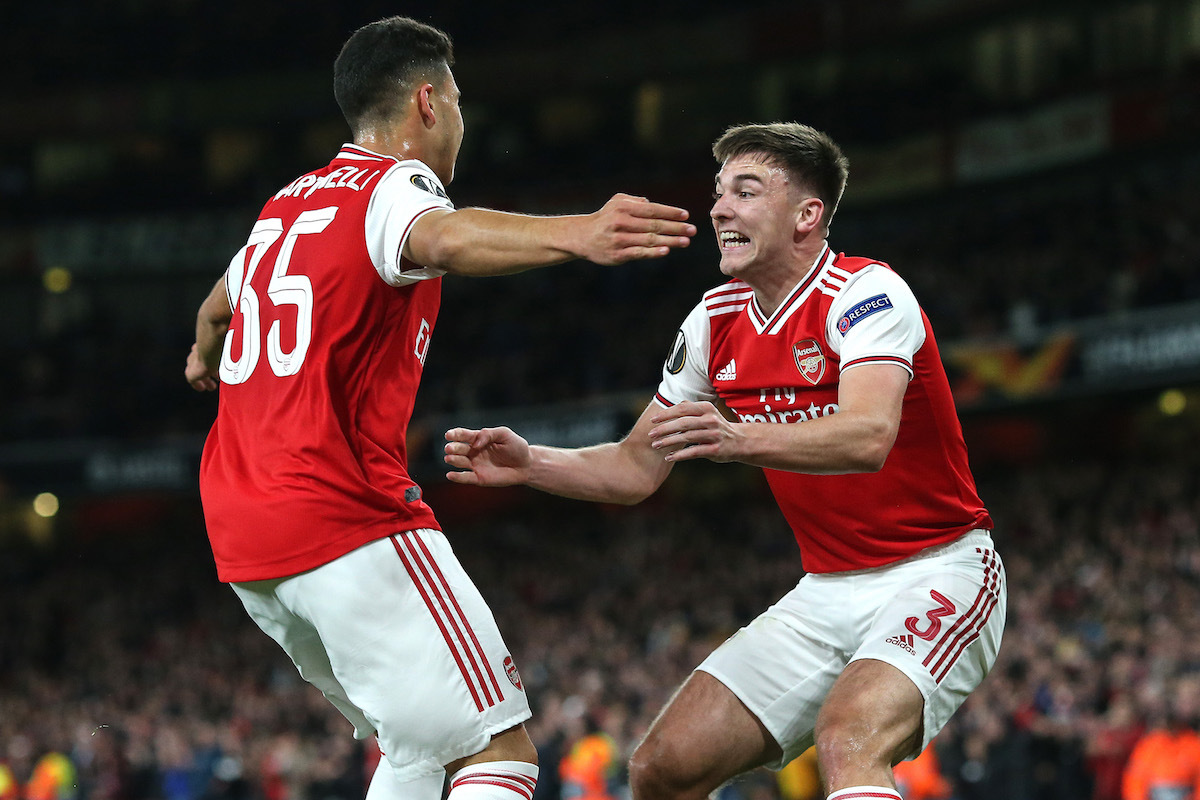 Supply and Convert - Tierney and Martinelli celebrate the opening goal

As with most of Arsenal’s Thursday night European home games, there were many season ticket holders that decided to pass on the 4-0 victory over Standard Liege. I’m not certain they could even offer their seats for re-sale through the club, given the large number of unsold tickets in the Clock End Upper reserved for silver and red members. Only one section of the stadium was packed, the blocks reserved for visiting fans. And fair play to the Liege support, who in spite of their team’s demolition, kept the noise going for the majority of the game, some of them without the benefit of wearing a shirt on a chilly autumn evening. Football fans, eh? Apparently their japes managed to get Kings Cross station closed earlier in the day – not so amusing that, unlike them playing crazyvegas casino en ligne, and there was a significant police presence around the perimeter of the stadium last night, which is unusual.

On the pitch, many of the starters were as predicted, basically the players that didn’t start on Monday at Old Trafford, with the exception of Lucas Torreira. In front of Damien Martinez it was good to see a backline including Bellerin, Holding and Tierney, and you know what? Aside from one errant pass (and rather like playing in casinos online, you can’t predict when the mad moment will occur), Shkodran Mustafi had a good enough game. He and Holding have now played three matches together and not conceded once. Food for thought. Of course, you take into account the quality of the opposition attacks (Eintracht Frankfurt were an exception – they did enjoy more chances, but were profligate), but still, it suggests potential. The acid test would be a weekend game.

In midfield, Torriera played as the deeper man, with Ceballos and Joe Willock ahead of him. A front three of Nelson, Martinelli and the returning Ainsley Maitland-Niles made up the eleven. Maitland-Niles not playing at full-back in the first team feels like a bit of a collector’s item these days, although I was under the impression that central midfield was his favoured position. It was pointed out to me after the game that his playing at right-back may have improved his game all round, and that he looked far tidier in a more natural position. He certainly made a good enough contribution to be an option in this position for Emery. He did occasionally swap positions with Joe Willock, although it was noticeable once or twice that when Bellerin drove forward, it seemed to be Torriera that was having to patrol the empty flank behind him. A little more teamwork required there, although the game last night became so comfortable so quickly that the players probably felt they could afford to be a little gung ho.

Mesut Ozil was not even on the bench. Emery could have started AMN in midfield with Willock and Ceballos to make room for Ozil as one of the wide attackers, or simply play a different formation to accommodate the German in the number 10 role with Willock and Ceballos a little deeper. Maybe he has concluded there is no room for Ceballos and Ozil in the same eleven, although in that case, not to see the German even named amongst the subs was a surprise. The bench was actually very strong (and at 4-0 up, I was scratching my head as to why Guendouzi and Aubameyang needed to be risked). Anyway, back to Mesut, one of the five man captaincy group remember. My suspicion is that Emery has given the player chances this season with the instruction that he has to play the pressing game that the other players are under instruction to do. And he doesn’t do it convincingly. On the ball, he is tidy, and perhaps might have been more influential aside from a couple of key passes per game, but off it, Emery simply gets frustrated when he doesn’t have the impact others do in denying the opposition time and space. So he’s effectively given up. The press managed to make a story out of the head coach’s words on the reason Ozil was not in the 18 man squad for the game. He said, “I am thinking every time to decide the best players for each match and the best player for the squad to play and [who will] help us. When I decide he’s not in the squad it’s because another player deserves it more.” Conclusion – Ozil is not giving Emery what he wants.

There are future stars in the ranks though, and Gabriel Martinelli certainly looks to be one. Add him to the very promising (and current first team pick) Buyako Saka and there are reasons for hope. Martinelli scored two cracking goals early in the game, one from a header, the other a well placed shot into the corner of the net. It settled the nerves and made for an enjoyable 90 minutes. Joe Willock added a third before the interval – it’s a plus to have a goalscoring midfielder in the ranks – and the only dampener on the proceedings was heavy rain that came and went more than once over the course of the match. Martinelli tried to get his hat-trick and came close. His ball into the goal for Arsenal’s fourth was knocked across the line by Dani Ceballos, although it would probably have gone in without his touch. The Brazilian forward had a fantastic game. I was cautioned afterwards that Carlos Vela had an impressive start to his Arsenal career, but hey, football’s about hope, right? Martinelli looks stronger than Vela in terms of his ability to cope with the English game, and scores goals with his head as well as his feet. One to watch, and I’d like to see him come off the bench in the occasional Premier League game to get more experience against English opposition, at least in games which Arsenal look comfortable in.

Another new signing from the summer we haven’t seen too much of is Kieran Tierney, and he was so impressive last night. He outshone captain for the night Hector Bellerin, although in mitigation, Bellerin has been out far longer and needs more games to get up to speed. But you can see Tierney’s intelligence as a footballer, and it’s interesting to see how he is comfortable coming off the flank to get involved in the play. Celtic were reluctant to let him go for less than £25 million and you can see why. He’s 22 years old and has obvious quality.

It’s nailed on that Unai Emery will play most of the players against Bournemouth that started against Manchester United, but then an international break follows. Arsenal do not play again until Monday 21st October at Sheffield. So in terms of match fitness, it should be a clean slate. Tierney, Bellerin and Holding should be played if they are better than the current choices.

It was noticeable that Nicholas Pepe came on as the first sub – presumably because Emery wants him to get as much game time as possible to accelerate his adaptation to his colleagues and see improvement in his impact on matches. It feels like this is going to take time. His lack of progress is more marked because Alex Lacazette is not in the team to assist with the scoring. It’s early days. I’ve pointed out previously that his shooting seems to be a concern, but the other thing that the game at United made clear is that, rather like Ozil, when his team do not have the ball, he isn’t as hungry to get involved as he probably needs to be to keep his place. Last night, a bit of me wondered if Emery was giving him pep talks in French and the player simply nodded acknowledgement without understanding a word he was saying. One to keep an eye on anyway. At the moment, the much cheaper Martinelli looks like a smarter attacking purchase.

There are two ways of looking at last night’s performance. Does it indicate real strength in depth in the Arsenal squad… or does it tell us that the Emery’s first choice eleven does not consist of his best players? Damien Martinez pulled off a cracking save in the second half after Ainsley Maitland-Niles had failed to clear a ball across the area. Three of the back four are definitely contenders. And ahead of them, Ceballos, Willock and Martinelli all have a case for inclusion. Of course, Bellerin and Tierney would have started the season in the first eleven under normal circumstances and it won’t be long before they are doing just that. But Emery has food for thought in other positions, and a bit of competition for places can only be a plus.

Great victory, enjoyable display, just a shame Martinelli could not get the hat-trick, but he had an outstanding game, as did several of his colleagues, Tierney the most notable. Safe to say Arsenal will qualify comfortably from this group, it’s now simply a matter of whether they or Eintracht top it. Bournemouth up next.