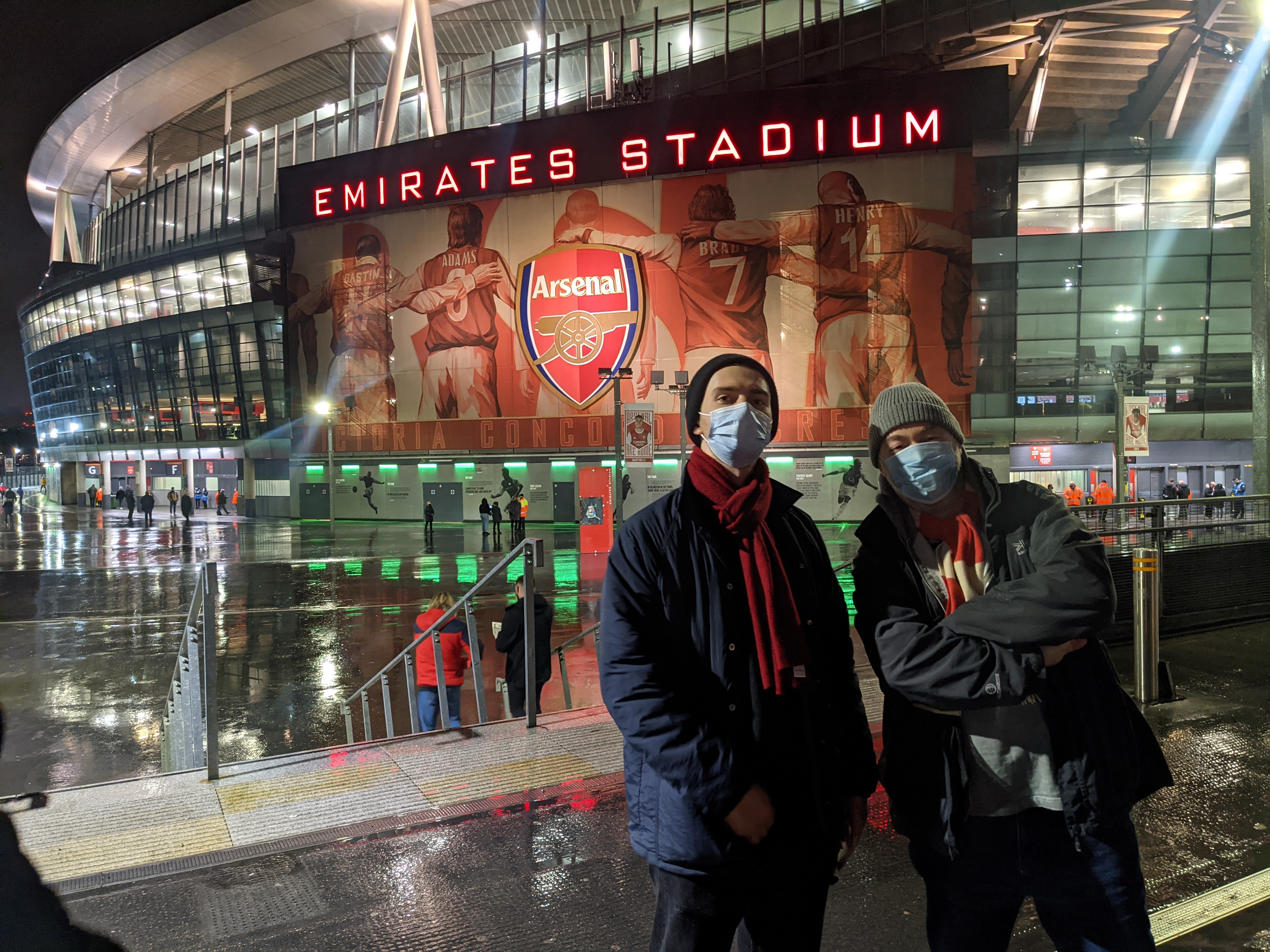 Old pals and loyal Gooners Tim and Steve back together at the Emirates.

In the first of a series of pieces on Arsenal supporters returning to the Emirates, here's loyal, long-standing Gooner Tim Cooper.

Read on as Tim Cooper joins 1,999 others at the Gunners home ground and finds that everything is different now - yet very much still the same.

Buy the new issue of the Gooner Fanzine here

The New Normal suddenly looks a lot like the old normal at six o’clock on Sunday evening.

We’re in The Twelve Pins, drinking one of the best pints of Guinness this side of the Liffey, buzzing with excitement. All seems right with the world at last: tonight’s the night: the night we go back to watch a game.

The last time was a far from convincing 1-0 victory over West Ham back at the beginning of March.

Little did we know it would be nine months before we went back. Or that when we did, the Hammers would be in the top six along with Southampton. Southampton! And no one - no one - thought we would be seventh from bottom with Christmas approaching. Or that… well, you know...

Matchday at The Arsenal

Yet here we are, with the noisy neighbours on top of the league and a relegation battle looming. And at 7.15pm on a Sunday evening - a time we have made our own in terms of losing football matches - we’d give our right arms for an unconvincing 1-0 victory against a team that would normally be at the other end of the table and who never beat us. Until they do.

Still, rewind to a couple of hours earlier, digging out the thermals, the sensible shoes, the coat, hat and gloves and the 1971 Double-winners shirt and red-and-white scarf. All present and correct. No moths. Don’t forget the umbrella. Ready to go.

Entry to the pub is a bit different these days.

Scanning a QR code, ordering at the table, tucking into a “substantial meal” to conform with the latest laws.

But the Guinness still slips down a treat and just the chance to enjoy some football banter with my mate Steve for the first time in months makes it all worthwhile. We’ve been doing this for 25 years.

Usually we walk past the old Rainbow Theatre and the Sobell to get to the ground, turning left at the Tolly, where we might stop in for a cheeky pint, or a Jameson’s to keep out the cold, or we might go on to the Che Guevara pub that we’ve only just found out is actually called El Comandante, though everyone calls it Che.

But tonight we walk down St Thomas’s Road because we don’t need to worry about the crowds down by the station and the queue to get up the steps to the stadium. There aren’t any.

There’s no one about: literally no one

No smell of burgers and onions sizzling in grease; no sign of jerk chicken; no evidence of the boys who sell those bags of sweets “two for a pound”; not even the ghost of the guy who used to roam the terraces half a century ago selling “Pea-NUUUUUUTS!!!” at Arsenal and Tottenham on alternate Saturdays.

You wouldn’t even know there’s a game on until you get to the ground itself.

On the steps up to the stadium there are two or three other fans on the way in. “WOTCHERFINKA TOTTENHAM?”shouts one of them in the traditional manner, receiving the traditional response from one of the others.

It seems pointlessly Pavlovian without a group to bellow back to him but it’s nice to hear anyway. It’s all part of the ritual. The rest of it isn’t.

There are several rings of security.

There always were, but this time they’re not telling you to open your coat, they’re checking the tickets you had to print out at home, then the next lot take your temperature with one of those guns, then you show your ID to another lot, then you get a full body search from a fourth line of security. And still you’re only on the concourse.

Once you’re through the turnstile it’s all different too. The bar is open but it has one of those snaking airport-style queue systems and the men’s toilets mark out the social distancing with green ticks and red crosses on the wall, while security staff make us all go in to our seats as soon as we’ve got our cups of tea.

And there, through the gap in the stand, we can see the pitch - gleaming green beneath the floodlights, and the heart soars.

It’s almost like the first time I ever came, as a child, and the first time I took my own kids, which has to be for a floodlit match because the magic of that first sight of the pitch stays with you for ever - the greenest green you’ve ever seen beneath the brightest lights, glistening under a steady stream of rain.

Our seats are spread out along the east side of the ground’s lower tier, each cluster of friends separated from our neighbours by at least two seats in every direction.

And of course, Arsenal being Arsenal and charging the highest prices in world football for a seat, no one really thought about the weather in December so about half of us are actually sitting in the swirling rain despite the 58,000 other empty seats all around us. And we’re not allowed to move back because of social distancing.

But let’s not moan. There will be plenty of time for that soon enough.

The club’s statement announcing the return of fans was upbeat: “Our matches have simply not been the same without you.” You can say that again. We used to watch our team score goals and win.

Surely, after shooting blanks against Leicester, Leeds and Villa, and scraping a goal before losing to Wolves, our home form would magically return? Surely the sight and sound of 2,000 fans would inspire Arteta’s boys to dig deep into their reserves of pride? Or maybe not.

At 6.50pm the players come out on the pitch, and several come over towards us, raising their hands to applaud. We all stand up to return the gesture.

Someone strikes up a song, though it’s inevitably *that* song, about how much we dislike our noisy neighbours (never more so than now) and it’s a bit muffled because we’re all wearing masks, which deadens the sound.

It’s an odd sensation to be here: more like watching a Sunday morning game on Hackney Marshes than an (ahem) elite-level match.

The players’ shouts are clearly audible and the urgent imprecations of the managers drift across from the other side.

We’re close enough to see the spray fly off the ball as it rolls across the manicured grass. Kieran Tierney takes possession right in front of us and looks behind him for an exit route as two Burnley players close him down; the orange-clad figure of Berndt Leno yells out “No, no, no, no, no”. Tierney plays the ball back to him anyway; we all chuckle as he clears the ball with ease.

Somehow it doesn’t seem quite real: or perhaps it just *does* seem real, compared to the televised events we have become used to.

Half-time comes and goes. Steve produces the Mars Bars because that’s what he’s done at half-time for the past 25 years, since before my son Theo was born.

Now he comes with us, though he prefers Snickers. We go back in with our tea and our chocolate and the masked cheering becomes quieter as the game goes on.

There’s a brief rise in volume as Xhaka goes through his traditional Total Fucking Idiot routine and gets sent off, and a kind of collective sigh of muffled resignation when Aubameyang breaks his goalscoring duck by heading the ball into his own net.

As the clock ticks round towards 90 minutes, two people in front of us get up and go home with five more minutes of injury time to play.

There’s no traffic to beat, no train to catch. It’s just our New Normal.