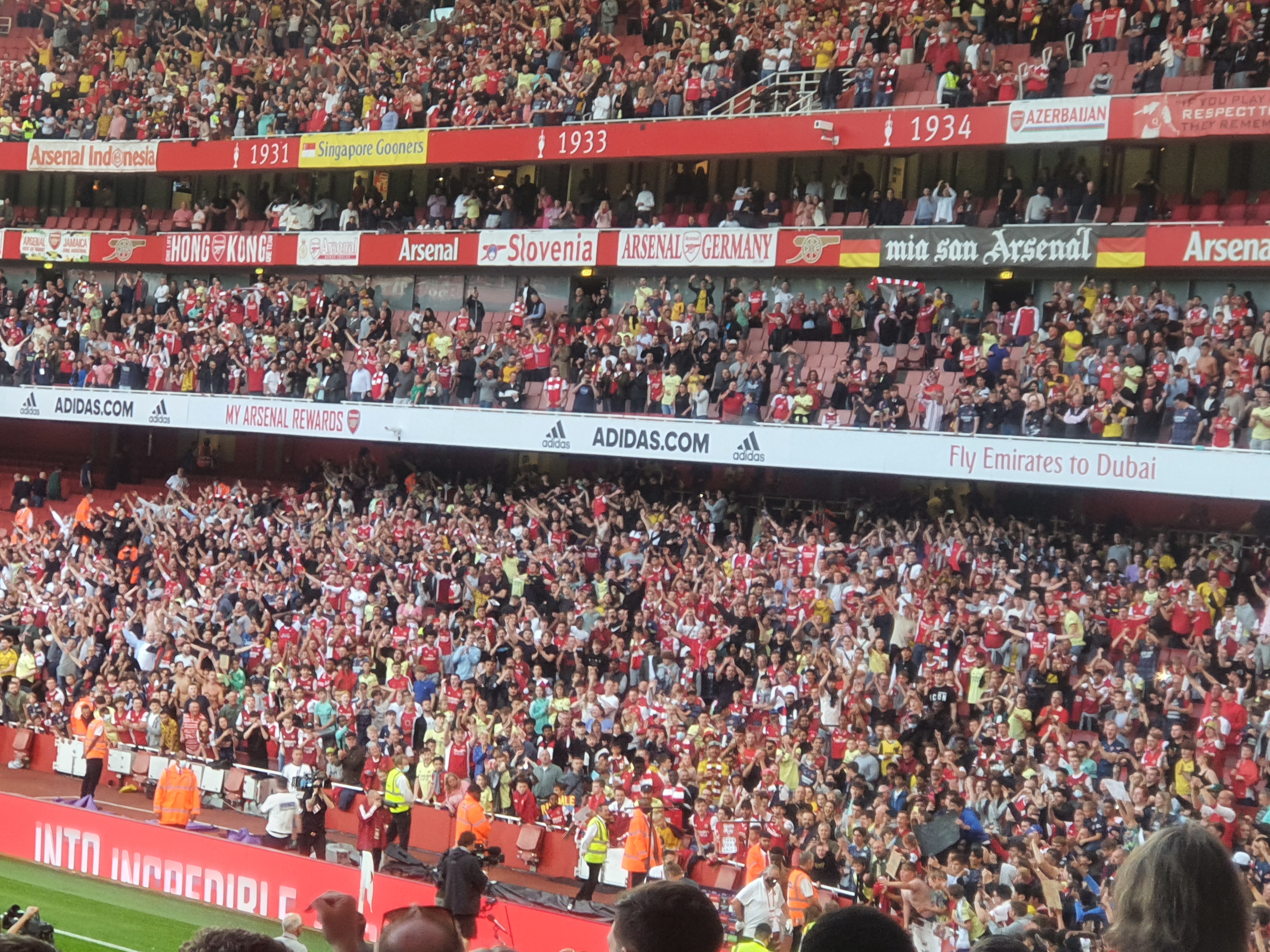 Okay. Before I start, I’d like to take this moment to apologise to Mikel Arteta.

This blog for the first three weeks erroneously gave off the impression that he was “about as useful as a chocolate teapot” as my Dad summed up. This, I now see, may not be the case.

What an absolutely perfect day. It really doesn’t get better than that. 3-0 up at HT having ripped apart a Sp*rs side through playing fantastic football.

A derby day win quite often comes with an overwhelming feeling of relief yet, while this victory didn’t come entirely without the obligatory alleviation of unwavering nerves, there was real pleasure in this performance.

For the first time in a long time, this Arsenal side played proper football. I said in a previous piece “there is a team in there”, and I think, today, Mikel Arteta found that team.

The day started as derby day always does for me. The muffled chants of Spurs supporters coming down our road in their corden from Highbury & Islington station.

This commotion previously sent my heart rate into orbit and my stomach into knots, fearing the reaction of the Sp*rs fans if they spotted my Arsenal shirt through the window.

This year for some reason, maybe because my brother and I had missed this tradition and perversely this group of Sp*rs fans, we felt ready for them.

We leapt to the window to watch this procession. To be fair, I didn’t feel as ready as my brother who decided that winding up the Sp*rs fans with his shirt off through the window was the right thing to do. It wasn’t. Although he did get a few nibbles which was enjoyable, the best of which involved a disgruntled fan screaming “I KNOW WHERE YOU LIVE” at us. Surprisingly he didn’t bother coming back after the game.

The walk to the game was painful. The NLD is always a great source of nerves for all fans involved, and the last thing that we all need is police to stop home fans from getting into the ground - but that they did.

Initially stopping a group of around 100 before the Danny Fiszman bridge, the police then led this growing group of supporters to the end of the bridge where they stopped us again.

This congregation had now grown to about 1000 as the police held their line firm, despite the Tottenham fans evidently being in the ground already. Eventually they let us through, like the gates being opened for a group of 1000 excitable greyhounds to bound through. We got into the ground with 10 minutes to spare after another excruciatingly long wait at the turnstile.

The Emirates was rocking on Sunday. From pre kick-off, to about half an hour after the final whistle the fans were electric and the same electricity reflected on the pitch.

My word, our boys were good today. If the players were nervous, they really didn’t show it. From minute one they looked up for it, and goals surely would follow.

The first came within 15 minutes, and no less than was deserved. Ben White - who has looked really good in the last three games -  towered over Harry Kane to kick off the onslaught. Odegaard then showed quick feet to find Saka,  who found his Hale End brother ESR inside the box to sweep home.

A fantastic goal, and no two players that I would rather be involved in a NLD goal. We never looked back. The second came 15 minutes later after a period of light pressure from Sp*rs. A fantastic ball from Tierney found Aubameyang, he flicked round the corner for Smith Rowe to drive and cut the ball back to him to sweep home after a flowing Arsenal move.

Complete bedlam in the Emirates, as Aubameyang re-enacted Henry’s (who watched on from the stands in a very suave retro Arsenal shirt) famous NLD celebration.

Seven minutes later, another. This one was a thing of beauty. Harry Kane lost his footing, resulting in another blistering Arsenal counter. He tracked back to thwart Saka, only for our starboy to pick the ball up again from Kane’s slide tackle and drive low into the corner.

Again, bedlam. This was one of those goals that sent the stadium into complete delirium, everyone hugging everyone. Unbelievable scenes, made even sweeter by the only recent return of full capacity stadiums. Arsenal blitzed a dazed Sp*rs side, whose chances of North London bragging rights were all but over by HT.

The mood at half time was one not only of complete and utter joy, but also of disbelief. We had watched our side, previously struggling for goals, completely click - at home, in the NLD. What a feeling.

Understandably, in the second half the Arsenal players didn’t have the energy that had blown Tottenham away in the first. Despite this drop in energy, Tottenham struggled to pose any real threat to the now established back five.

Tomiyasu was fantastic again, winning everything. Ben White and Gabriel kept Kane, Son and Lucas in their back pockets all game. Kieran Tierney not only defended solidly, but also as always provided an attacking outlet down the left hand side. Ramsdale solid as ever.

The goal conceded was the only dampener on an otherwise perfect day. A lapse in concentration saw Reguillon pick out Son on the edge of the box who fired past a disappointed Ramsdale in goal. 3-1, a nervy 10 minutes to go.

Despite the nerves being present right up until the final seconds of stoppage time, Spurs didn’t really have any more chances - apart from a deflected Lucas Moura shot which forced Ramsdale into surely one of the saves of the season as he tipped it onto the bar.

Only Arsenal fans, still reeling from the shock 4-4 draw, would look at the emptying Spurs away end and think “Oh dear” rather than “They’ve all left because we’ve thumped them”. Thankfully, it was the latter which turned out to be true.

The final whistle went, and the exhausted Emirates crowd erupted one final time to commend their team on what was a fantastic display.

Mikel Arteta, who was apprehensively organising his troops right until the final whistle, embraced his coaching staff before running onto the pitch to congratulate his players.

Fans stayed long after the final whistle to applaud their team off, some even stayed to give Mikel Arteta one final show of their support as he conducted his post match media duties.

This felt, if the Burnley victory didn’t, like a proper turning point.

A rout in front of electric fans in arguably the biggest game of the season.

No one deserves this win more than the Arsenal faithful, whose support has been unwavering for the most part this season.

Mikel Arteta’s Arsenal might just be in with a shout this season - of what I’m not sure but a shout nonetheless.

Mikel Arteta seems to have found his Arsenal formula. On Sunday, it clicked.

A tough trip to Brighton follows next Saturday, but our side have made the week leading up to it a great one. ‘Tottenham Hotspur, you’ll always be shit…’