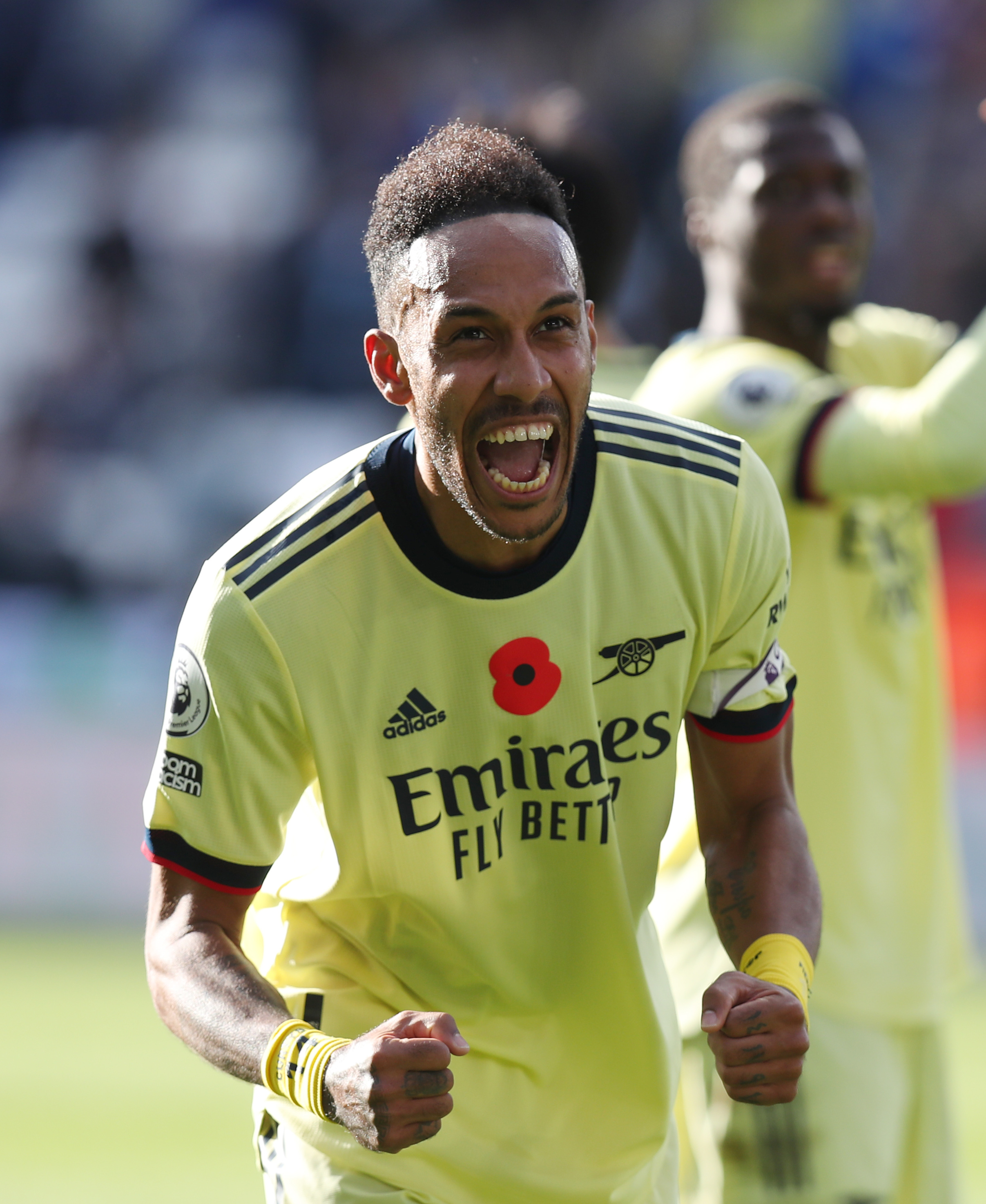 Ok this is becoming a regular feature now.

I was unfairly considering his removal, making him out to be “as useful as a chocolate teapot” etc etc…

Anyway, I’m sorry for that. I also retract my statement that the first half against Tottenham was an “outlier from a team that is otherwise boring to watch” - it was harsh, unnecessary and as it turns out complete rubbish.

Mikel, you’re a genius and I also apologise profusely in advance for any further comments which highlight my incompetency.

Leicester: The best away-day yet this season

Anyway, what a day

The best away-day yet, and what a time to do it.

Fifth! Three points behind City! How did that happen?

We were getting relegated only a couple of months ago. A turnaround almost as miraculous as Rob Holding’s hairline recovery, which still baffles me.

Another early start, this time for me and my mate Sol (an away end virgin) as we headed to meet Layth who is omnipresent in his Gooner Mobile, waiting for his passengers at Hitchin.

Thankfully a shorter drive than to Burnley - even though I thought Leicester was just above Manchester.

I’d say, so far, Leicester has been the perfect away-day. Obviously the result was fantastic, but Leicester is far enough away to feel like a proper away game but not too far away for it to feel a drag. The sweet spot.

A fairytale town. Leicester, having seemingly completely turned its fortunes since King Richard III was dug up, houses one of the most unbelievable and favourable sporting stories ever.

Beating odds of 5000/1 Leicester won the league title in 2016 (having performed a Houdini-esque escape from relegation the year before - a string of victories that coincided with the discovery of Richard III...).

A victory that sat particularly well with one of my friends’ grandads who, since starting to support Leicester having moved in 1988, had put a £10 bet on Leicester winning the league before the season.

Luckily he opted to continue this tradition in 2016, instead of being tempted in by the slightly lower odds of Elvis to be found alive before 2030 (500/1 as of that year).

Every football fan has revered Leicester since that title win - this reverence seems to be quickly becoming rivalry though, as they have started to cement themselves as one of the top teams in the Premier League.

We arrived an hour and a half early. Thankfully, we spotted a sign for a Nandos and duly scampered off for some pre match grub.

There were about 20 of us outside, chomping at the bit to get in - although most chose the 11am pints next door.

Not for me. Not only was I wanting to get in for the food, but suddenly I realised that my massive Arsenal coat (paired with the away shirt underneath) was not ideal attire to stand outside a pub with a load of Leicester fans.

Dirty looks, but perfectly nice to be fair. I can imagine that I wouldn’t have been able to do anything similar in the 1980s. Nor would there have been a Nandos - how lucky we are to live in this generation.

A short and pleasant walk to the ground, although we were greeted by many more unwelcoming looks before we joined up with the rest of the Red Army.

Party mode in the away end

The concourse was in party mode, and inside the ground the away end as usual was buoyant - welcoming Ramsdale, White and Gabriel over to their end with familiarly rapturous applause.

Boy did the players reward this buoyancy. Although I do wonder whether this vibrancy pre-match was consistent throughout the fans, particularly in the case of the two gentlemen I overheard on the way in talking over a pint.

One said, quite aggressively, to the other “See it all comes back to the point I always bloody make about how we should’ve kept Samir Nasri”. No need for that conversation, or point, really.

Flying out the blocks seems to be becoming the Mikel special.

Even from the kick off, Aubameyang and Lacazette charge up the field, setting the tone for those behind to follow.

It only took five minutes today for our efforts to be rewarded. Again, from a corner.

You know things are weird if we’re scoring from corners.

The away end was taken by surprise. No one was particularly concentrated, until the ball hit the back of the net and bedlam ensued.

Absolute scenes, and the smell of cordite suddenly seemed much more pleasing.

The start continued, with the Gunners looking menacing and dangerous every time they moved forward. Smith Rowe was in fine form, and his goal was nothing less than he deserved.

What a perfect view most of the away section had for that goal - celebrating as soon as the ball left Smith Rowe’s boot as Schmeichel was rooted to the spot.

Again, absolute scenes. I have to say, the celebrations for the second were some of the most mental I have been involved in.

People fell like dominoes in our row, forcing me and the two lads next to me to spill out into the middle of the row as a pyro rolled in front of us. Proper, although as my Dad will no doubt tell me, I’ve seen nothing proper yet...

As it so often does, bizarrely, our electric start dissipated.

Yet our back five stayed solid, conceding very few shots on target and those that we did Ramsdale dealt with.

With almost the last action of the first half, Maddison lined up a free kick in a dangerous position.

As Mikel Arteta put it “As soon as it left his foot, I thought, goal.”

What we were all forgetting though: Ramsdale is the best in the world.

He sprung to his left, almost like Superman, and clawed Maddison’s fantastically struck free kick onto the underside of the bar before leaping back up to stop the seemingly unmissable follow up.

The score remained 2-0, and Ramsdale ran off the pitch to a deafening chorus of his name. High praise from even Peter Schmeichel, who described it as “one of the best saves [he’d] seen in years”.

The second half began in much the same vein as the first. Leicester on top.

The game needed changing, it seemed inevitable that Leicester would score. I say that - we essentially had a brick wall in the net.

Arteta did recognise this need for change, and utilised the multiple systems that we are now comfortable in to great effect.

As brilliant as Lacazette was again, Odegaard was the right move. As soon as he came on the game changed again.

Suddenly the ball was pinging around in the Leicester penalty area again, and a third goal should’ve been the result but for a squandered golden opportunity for Aubameyang and some wasteful moments in the final third. Anyway, it wasn’t necessary.

The back five stayed solid, and the midfield looked like the dynamic duo that all Arsenal fans hope it will consistently be.

Ramsdale has now saved 24 of the 28 shots on target he has faced, and he still hasn’t lost as an Arsenal player.

As the final whistle went, the fans went nuts. What a win. I’ve said this before, but I’m going to say it again: This team really cares. They want to play for Arsenal, they want to win for Arsenal. This manager cares. There’s not a player in that squad that I don’t like, and I think I speak for most fans.

The pride the fans take in victories for this team - the youngest in the PL by some distance - is like nothing I’ve ever seen or felt before.

Particularly as I begin to feel like a cog in the machine that is the travelling crowd.

Every one of them came over to thank the fans, even those on the bench. Aubameyang and Gabriel raised their fists triumphantly which sent the fans into a frenzy, before Ramsdale (who had just taken a bow in front of the Leicester fans who were giving him stick) came over to receive his deserved plaudits. What a man. What a day.

The Arsenal march on

Undefeated in nine, they are unrecognisable in comparison to those who played their part in our opening three league defeats.

Anyway, we’ll cross that bridge when we come to it. Until then, Gunners.