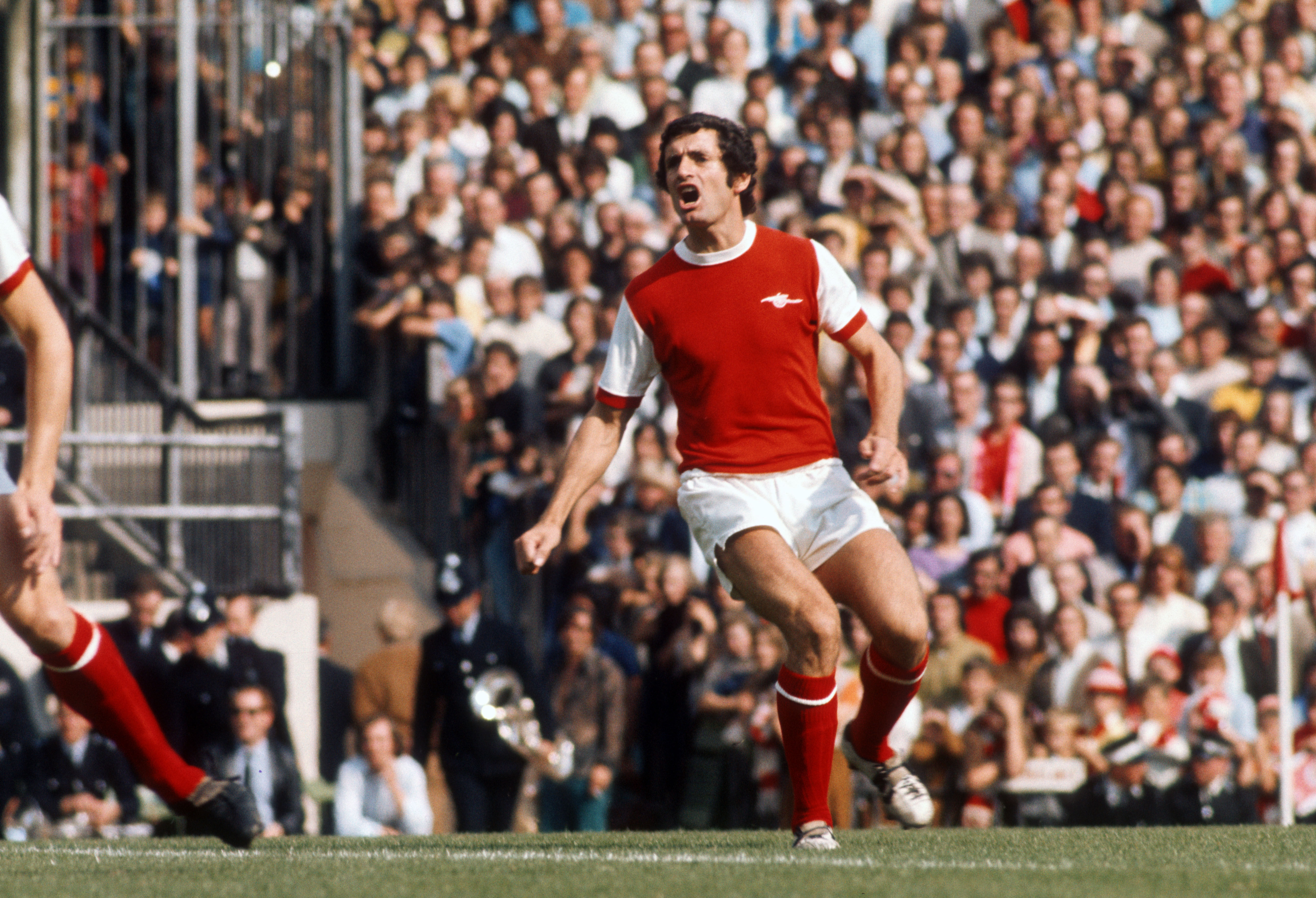 Frank McLintock said that once he knew Arsenal were interested in signing him there was never any doubt, in his mind, that he would move to Highbury.

The history and grandeur of the place, albeit at that time a faded grandeur, still cast a long shadow over the English game, and to an ambitious footballer like McLintock they represented a fantastic challenge and opportunity.

The young McLintock had made his name at Filbert Street, a lean and slight midfielder, who was very nearly sent packing back to Glasgow after a trial, when only the insistence of the then coach Matt Gillies persuaded manager Dave Halliday to take a gamble on him.

Halliday did just that and McLintock joined the ranks of Scottish players at Leicester City that were so numerous that at the time the club were known as Leicester Thistle!

Once Gillies had become manager, McLintock settled into the side. Indeed, Gillies was one of Frank’s biggest fans, frequently citing him as an example to other players on how to make the most of every bit of ability a player might have. Gillies was impressed by the extra training McLintock routinely put in, especially the work he did with his left foot in a successful attempt to turn himself into a two footed player.

Under Gillies, City flourished, and McLintock’s first brush with success came in 1961 when City made it to the FA Cup final, only to lose: the first of a series of Wembley heartbreaks for Frank. 1962/63 witnessed the worst winter in living memory with snow standing several feet deep in places and hanging around from January until March.

A long unbeaten run saw City top of the table with only a mere handful of games remaining, and once more at Wembley for another FA Cup final, chasing an unlikely ‘double’. City fell away in the league, and lost again in the cup final, which for the young McLintock was a sickening blow upon an already raw bruise.

The club ended up empty handed but in that small corner of the East Midlands the ‘nearly men’ of the ‘Ice Kings’ stand almost alongside the ‘history men’ of the more recent and equally unexpected league title success in terms of the fondness with which they are remembered.

By this time, McLintock had become one of the hottest properties in the domestic game. Leicester held firm in the face of bids from both Bill Shankly, and Don Revie. But when Arsenal’s Billy Wright offered £80,000 in the autumn of 1964, City relented and allowed the restless McLintock to chase his dreams of ‘cups and caps’ in North London.

McLintock was initially shocked at the footballing chaos he found at Highbury. He commented that Wright’s team played to no discernible plan or pattern, instead playing spontaneously like a jazz band but crucially with no rhythmic accent.

Under Bertie Mee things improved, Arsenal got their white sleeves back, and McLintock began to appreciate the rigour and discipline Mee provided along with the tactical innovation and progressiveness introduced first by Dave Sexton, and then by Don Howe.

Despite further Wembley despair – a fractious, almost ‘anti-football’ affair against Leeds in the 1968 League Cup final, and again 12 months later, the soul destroying and belief sapping capitulation against third division Swindon Town in another League Cup final Arsenal continued to grow: becoming battle hardened, forged upon the anvil of defeat: football’s hardest lesson to learn, but perhaps her most effective.

Perhaps that nadir for Arsenal and especially McLintock, the defeat to Swindon, was indeed the catalyst for what followed: when a magical butterfly of success soared around Highbury after emerging from a stifling, middling chrysalis which had described the club for 17 years?

The 1970 Inter-Cities Fairs’ Cup put so many ghosts to bed, both for Arsenal as a club, and specifically for Frank McLintock, who by now had been reluctantly converted into a magnificent centre-half.

Always a great footballer, it was perhaps his strengths as a man, which left its greatest mark on Arsenal’s history, for his contribution at a key moment can never be underestimated.

After losing the first leg of the final 3-1 against Anderlecht in Belgium, McLintock is reputed to have delivered in the dressing-room immediately after the game one of the most rousing team talks in the club’s history.

McLintock is said to have spoken so confidently and convincingly that ‘keeper Bob Wilson believed not one player left the dressing room unconvinced that Arsenal would triumph back at Highbury in the second leg.

People have born witness time and again to the emotional charge that ran through that whole night in April 1970, when Highbury heaved, rocked, and shook with sound, expectation, and the simple weft of dreams no longer able to be contained.

That McLintock could help to channel all of that raw emotion in to one of the finest and most defining team performances of Mee’s reign is of great testament to him as captain.

That night every single player and spectator did their bit and McLintock led the lot of them into battle and eventually over the winning line to lift a first prestigious European honour, which bestowed on each player the right to now look in the face every Arsenal great who had preceded them. History would no longer be a burden to McLintock or to Arsenal.

That assertion was so spectacularly and authoritatively underlined twelve months later, of course when, once more led by McLintock, the league title and then the FA Cup were won.

McLintock later said he believed that some of the compliments paid to Arsenal were perhaps backhanded insults: ‘resilient’, ‘organised’, ‘full of character’, and ‘powerful’.

While those words still have currency they will be, for me at least, nought but battle honours, and a litany which captures the very essence of Arsenal’s greatness.

That team led by McLintock stands alongside the very best in the club’s history, and perhaps it bore more similarity to him in terms of character than any other player (and there were plenty of other candidates). McLintock won the Football Writers’ Player of the Year award in 1971, a small recognition of his immense contribution to one of the games great achievements.

The break-up of the ‘double’ team was perhaps too swift and too brutal, and McLintock became a high-profile victim of Mee’s lofty ambitions to restyle the club. But history never fades, nor will the aura of McLintock’s greatness ever diminish.

Occasionally a player comes along who embodies the spirit of their club, and McLintock was almost the physical representation of all those abstract concepts upon which Arsenal Football Club are built.

Frank was my first Arsenal captain, and along with another Arsenal centre-half of later vintage stands as one of the finest of the great men who have led this football club.

Happy birthday Frank and thank you for all the memories.