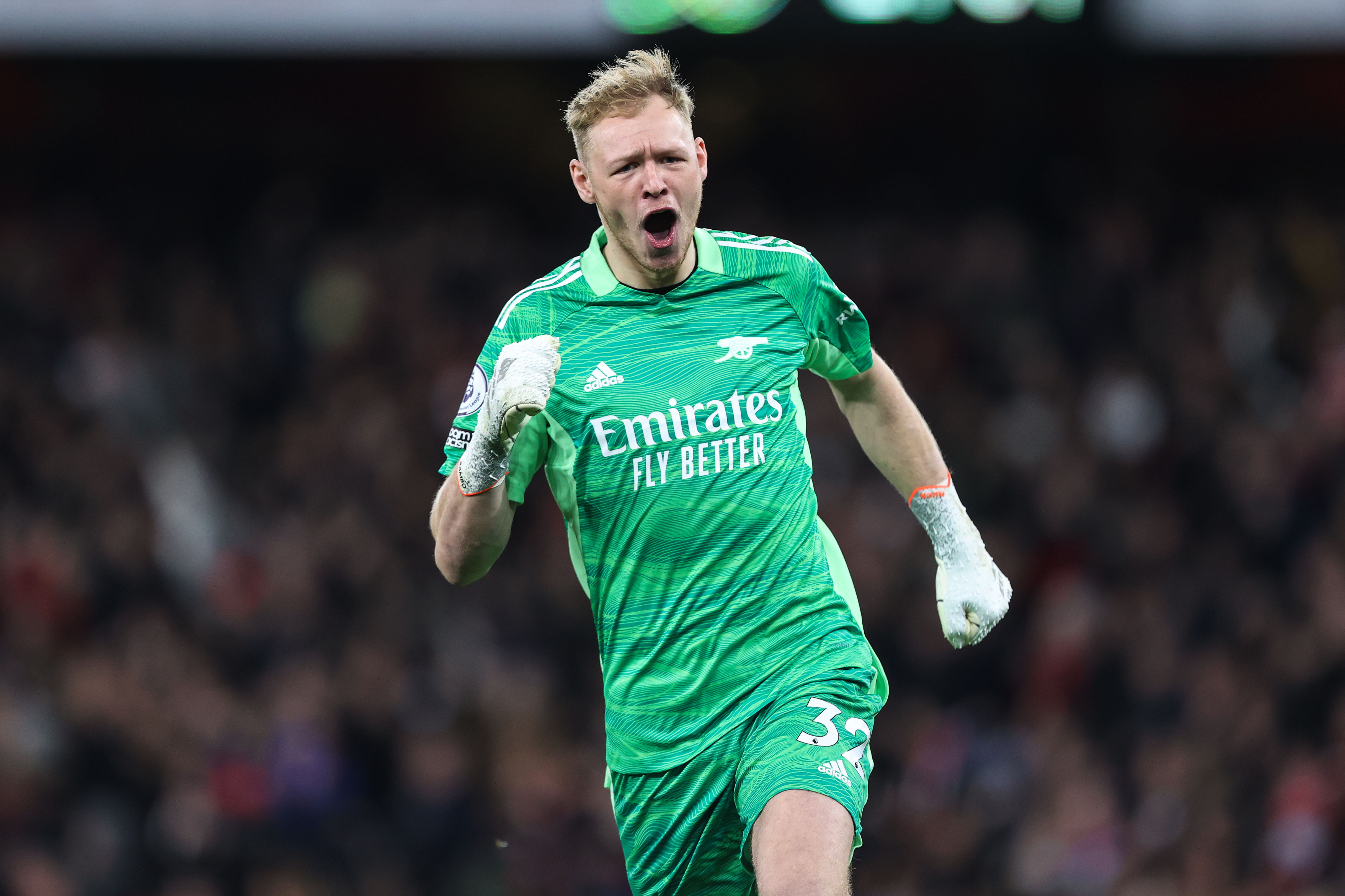 Arsenal and England's No1: Aaron Ramsdale

So, a 2-0 win and comfortably our best performance of the season so far against West Ham.

What we saw on Wednesday evenign was 11 players out there performing as a team, not 11 individuals, not 10 and a star player.

It was a real team performance, from top to bottom.

Everyone knowing their roles and seemingly everyone prepared to run, chase, and perform to the best of their abilities, all over the pitch.

This game had banana skin etched all over it, a resurgent West Ham team coming to the Emirates with real hopes of causing an upset firmly on their minds and also very real hopes and dreams of finishing above us for the first time in the league since the days of Cottee and Frank Mcavennie.

It’s very easy to kid yourself into thinking we should easily roll over any West Ham team that comes into town, but this Premier League is ever evolving and always ready to throw an upset into the equation - which made this performance all the more satisfying.

The hunger of Lacazette to chase down Fabianski, anytime the ball went near him was lovely to see, a more balanced committed Partey in the middle of the field showing us glimpses of the £45 million footballer we thought we were getting also happy on the eye.

Balanced at the back without over playing it and with Ramsdale looking assured like he normally does it’s fair to say that West Ham weren’t able to cause us too many concerns throughout the course of the whole game - but that was down to how well each and every single cog of this machine performed on the whole as a unit.

There weren't any signs of anyone being carried, nor any signs of unwillingness to track back and defend, this was as close as you are likely to see the type of football Mikel Arteta has been trying too impose on Arsenal since his arrival on December 20, 2019.

Two years in the making, and with some considerable patience shown by the supporters, it feels to me undeniably that Arteta has the backing of this group of players, and that we in turn should stick by him and see where this goes.

It feels like a weight was lifted off of this team, dare I say it by the decision to relieve Auba of the captains armband in the build up to this game this week.

By grabbing the bull by the horns and leaving none of the players in any doubt as to who is in charge, he has tightened the bond between dressing room and the stands in one foul swoop.

I genuinely hope that Auba has some time to reflect and comes back stronger for it, he is still a world class operator on his day - and hopefully, maybe being relieved of the armband will do him a favour and allow him to focus on what’s important for him to be doing. Namely, bagging goals, preferably by the dozen.

If he fails to achieve that, rest assured we have someone waiting in the wings who is ready to step in and deliver the goods.

A word on Gabi

Martinelli run his socks off all night long and was very unfortunate to not come away from this performance with the MOTM accolade.

As it is he has bragging rights for grabbing the first goal, highly important coming just two minutes in at the the start of the second half, his jet heeled acceleration left the West Ham defender for dead before a curled finish into the far left corner.

His goal bought sheer joy to the Emirates faithful in the ground, if the ball were delivered by Denis Bergkamp in his prime no one would have been able to tell the difference such was the weight on the pass delivered by lacazette, and the finish was eerily reminiscent of a Thierry Henry finish.

Simple, easy free-flowing football finished off with aplomb, what’s not to love.

At 1-0 the game was always in the balance, and while we were scarily dominant in possession, it was always at the back  of my mind that this is going to be a case of smash and grab by West Ham.

Would the stars align here to give encouragement too all of the nay sayers and the Arteta Outers on social media?

Would the clouds gather once more over the manager after having a busier week dealing with the media than he would have hoped for in light of the captains armband shenanigans?

Thankfully no they wouldn’t.

If the ray of sunshine it required to bust those clouds wasn’t delivered by Lazazette's missed penalty, a sense of calm and the cherry on top of this fine cake was delivered by the in form Emile Smith Rowe, a late replacement into this game for a tiring Odegaard.

In praise of ESR

ESR's link up play on the counter attack, with Saka finding him on the edge of the box running at the retreating West Hame rearguard, shaping to deliver it to Fabianski’s top right hand corner, he skilfully outwitted the former Arsenal No1 by slamming the ball into the bottom left - to give him and his team mates the space we needed to see this game out comfortably.

A class finish from a class operator.

I have mentioned before in previous articles how much a fan I am of watching ESR develop, and he just keeps on getting better and better - clearly wanting to make a point to his manager that he was wrong to drop him.

A master stroke, and testament to Mikel Arteta’s man management skills that he has this group of players chomping at the bit and fired up ready for action.

Odegaard in for ESR and vice versa is a near identical swap, both are entitled to get minutes but neither will be too inclined to have a moan if they don’t is exactly the kind of environment you need to be creating at a top flight football club - especially those dreaming of entering the elite level.

This win moves us up into fourth, can that be classed as the elite level?

Not really, not for me. we are still some distance behind Manchester City and Liverpool in terms of squad depth.

That is still going to be a crazily-hard party to gatecrash into.

So I am keeping my feet firmly on the ground for the time being and simply enjoying the signs of a true team performance.

Not too high and not too low. Not getting much further carried away than where the next three points are going to come from that will allow us to keep progressing as we are currently doing.

The boss will be hoping for a clean bill of health regards injuries.

I don’t think he will be wanting to tinker with this team too much as it stands, but if he does I’m increasingly more inclined to believe he has the situation under control and I’m happy to go along with his judgement calls as he see’s fit.

As time has progressed it’s clear to see that there are certain types of players who just aren’t going to fit into his plans, the Champagne Charlie types if you will.

More power to him as well because of his stance.

So if the players are being kept on a tight disciplinary rope, then I for one am all about it, they are highly privileged individuals with the mount of money they can earn, so at a minimum the least we can expect as normal folk attending a game is a level of professionalism that you or I would be expected to meet in the workplace.

If there’s a start time, be there early, put in a shift, and don’t question the system too much. Do your bit, keep your head down and your nose out of trouble, and if you can’t abide by those rules there might be consequences for you.

The team's polished response on the pitch tonight tells me everything I need to know about this dressing room.

And that’s from the comfort of my sofa and without the need for the Amazon fly on the wall documentary that is being filmed behind the scenes the moment.

As I have said before I’m not getting too carried away, but promising signs indeed.

Last point I want to make is to do with VAR, and potential play acting. It still seems to be a blight on the game.

There were a couple of controversial moments in the game: the penalty incident and the sending off.]

While the West Ham defender did make contact with the ball, it was only barely.

He did go over the top of it and he did make some solid contact with Lacazette who was writhing around in pain, but how much pain he was in is only for him to know?

I have never been a fan of the over the top dramatics you see on a football field, the rolling about, all that guff.

And Laca was certainly up and able to take penalty kick himself a few minutes later.

The players all still swarm around the refs, still try to win a fraction of an advantage, when VAR should really be looking to remove that aspect away from the game.

There are cameras that are picking up every single little detail now, and as VAR becomes more and more accepted into modern day football, this is an area where I would like to see it implemented more.

Eradicate the cheating, the ref surrounding, the antics if you like.

I would like to see a game of football played where the ref is respected much like they do in the egg chasing.

Where the official's word is final over there - and if you give him any lip the ball is going forwards 10 yards.

Maybe in season's to come that’s what we might be seeing. One thing is for sure they are doing a much better job of using VAR this season than they have thus far.

Not perfect, far from it, but ever improving, much like this team.

I will take it all day long.

Sing up and sing loud for the boys, especially in those squeaky bum moment’s when the result is in the balance, and we are hanging on at 1-0 - that's when you need to be the 12th man.

Don’t ever underestimate the importance of your role to play in deciding these events.

A loud raucous atmosphere can be the difference between getting over the line and the team retreating ever deeper into their own half before an equaliser is scored.

You need to be leaving the ground with voices being lost, that’s your role, hoarse and In need of liquid refreshment, that’s your part to play in this.

Let Mikel Arteta dish out the fines and the discipline, he knows what he’s doing, he has shown us on more than once he’s the boss.

Keep the good vibes rolling and the three points coming in.