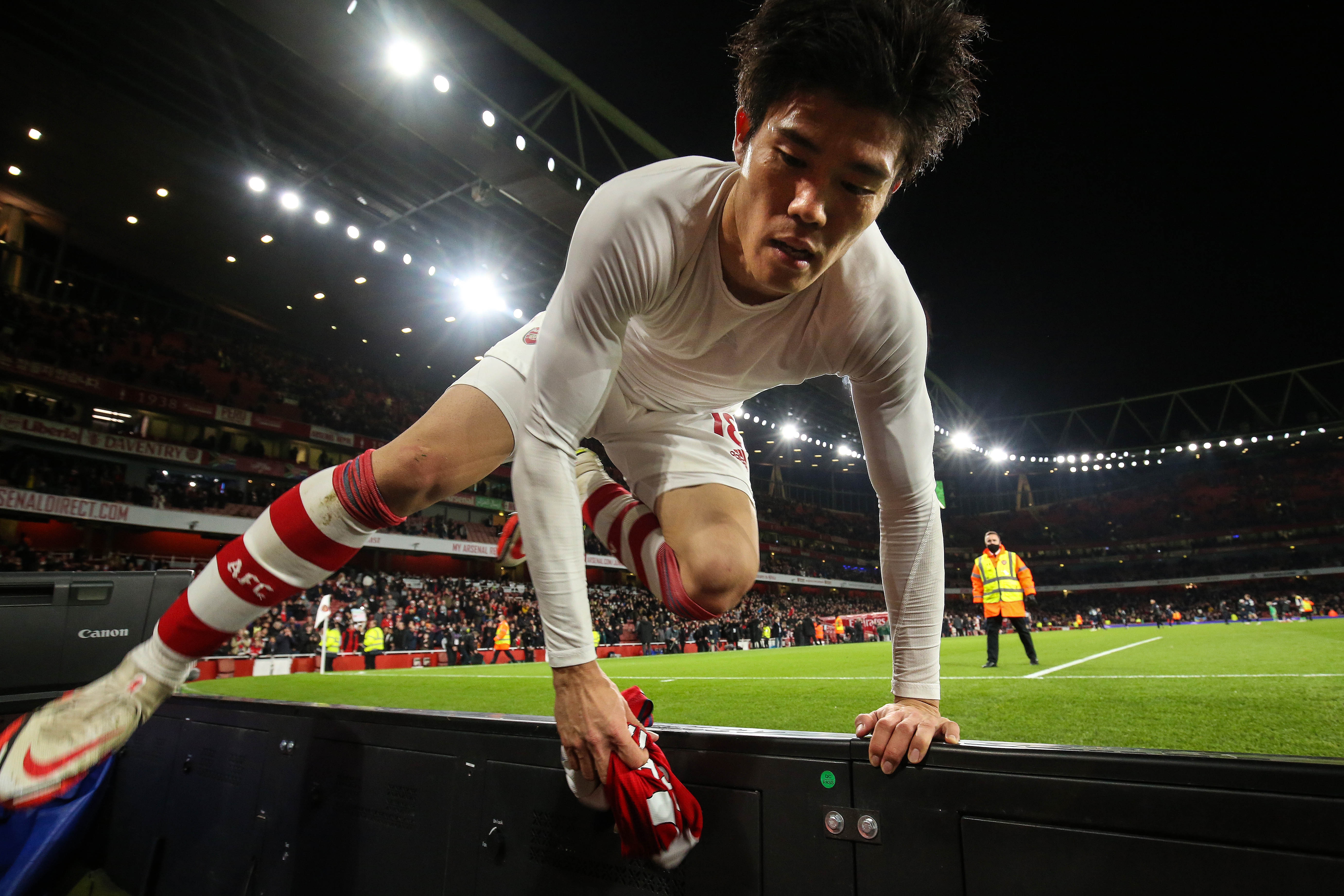 Arsenal 2-0 West Ham United. Takehiro Tomiyasu of Arsenal hops over the advert boards to give a fan his shirt - Photo: Charlotte Wilson / Offside.

Again I’d like to start this piece by taking the time to apologise to Mikel Arteta, who I said had “more to answer for than I thought”.

Those words were again too harsh, and born out of the rollercoaster of emotions of being an Arsenal fan.

Mikel, I apologise, you indeed know more than me and I would again like to apologise for any further questioning of your abilities from future Lowell. Thank you.

What a performance that was.

Intensity, quality, and solidity. Absolutely no problems caused by a side that has taken points off Chelsea, Liverpool, Tottenham and beaten City and United in the cup.

It was a deserved victory, and it came as a result of what, in my opinion, has been our best performance under Arteta.

The first top 10 team to defeat West Ham this season! Following in my footsteps too, Arsenal have finally tested positive for goal difference! What a day to be a Gunner.

The importance of the game was obvious. Two points above us in the table, a game under the lights at the Emirates gave us the chance to leapfrog West Ham into the top four.

I was extremely nervous, as was every Arsenal fan. Up until this morning I still held hopes that I would make it to the game, willing on a negative LFT result.

Alas, it was not to be and the nerves were even worse from the sofa.

Again I felt bad, and sick. Letting my team down.

Watching the sea of red scarves streaming down the centre of Highbury Fields and feeling like I should be one of them. I am one of them! Just not again until Sunday in Leeds.

With my brother now riddled with the virus as well, I had some welcome company for the game.

We were buoyed by the first half. Nerves turned into encouragement as it became increasingly clear that the team were up for it.

They had come out with “fire in their eyes” as Mikel Arteta said he hoped they would before the game.

The press was disciplined, which in turn gave us complete control of possession. There were moments of extremely slick attacking play, particularly from the menacing Bukayo Saka down the right. Ødegaard, Lacazette, and Martinelli were all lovely too.

Laca linked things up well, whilst Ødegaard again displayed his silky touch which nearly created for Martinelli a couple of times.

HT at 0-0, despite absolute dominance. There was a buzz around the Emirates, fans knowing that their team were performing at a very high level. The level had to be maintained though, no dropping off.

We started the second half in the same vein, and so did Arteta. Throughout the game he was in every challenge with his young team.

Every shot, tackle, pass, he was there with them too. It’s so refreshing to see a manager like that on the sideline for Arsenal, having been so used to the often statue-like figure of Arsene Wenger.

It’s not hard to see where the players get this intensity from. Three minutes after the restart, we got our reward.

Laca turned and fed through the lightning quick Gabriel Martinelli, who channelled his inner Thierry Henry as he bent it into the far corner at pace. What a goal, and so well deserved.

Both for Arsenal, and for Martinelli - who has had to wait for his opportunity but is very quickly making himself undroppable.

Testament to his talent, and moreover to his character at only 20 years old. We then continued to dominate, again like Southampton relentless in our pressure for a 10-15 minute period. Xhaka had a chance, as did Lacazette.

Eventually the pressure told, and we were controversially awarded a penalty for a fairly clumsy challenge on Lacazette from Coufal.

He was also handed a second yellow and sent off for the foul. Controversial, but the kind of decision that we often don’t get in our favour when rivals do. Laca, who hadn’t previously missed a penalty for Arsenal, stepped up… and was thwarted by the sprawling Fabianski.

A real issue now… Luckily, it didn’t cost us today, nor did it on the previous two occasions but eventually it will.

We then sat off a little bit, controlling possession at times but obviously nervous and West Ham came forward - lifted by the penalty save.

Their endeavours, causing very little trouble, in turn left space in behind. Saka and the substitute (who’d have thought) Smith Rowe took advantage.

Tomiyasu and Saka battled well on the right before Saka emerged with the ball, he played Smith Rowe who drove on and finished cleverly on his weaker foot into the bottom corner. Scenes in the Emirates. That’s one of my favourite kinds of goals, one that seals a game late on having been nervous.

There’s a relief to the celebration as well as the obvious glee.

2-0, FT. What a result, and the buzz and faint chants floating towards me as I sat in the garden were very comforting. The sounds of my real home.

Two games in a row where we have been genuinely entertaining and enjoyable to watch, and I’m afraid these performances have correlated directly with the dropping of (ex) captain Pierre Emerick Aubameyang.

The young Gunners were snapping at his heels, and I don’t think he can catch them back up now. Arsenal career over, barring a miracle.

We march on. Fourth (for now) and playing some fantastically entertaining football. On paper, we should be looking for nine points from nine before we face City.

Football is never that simple though.

Leeds await, and their form is really screaming “We need to play Arsenal”.

See you then, Gunners.