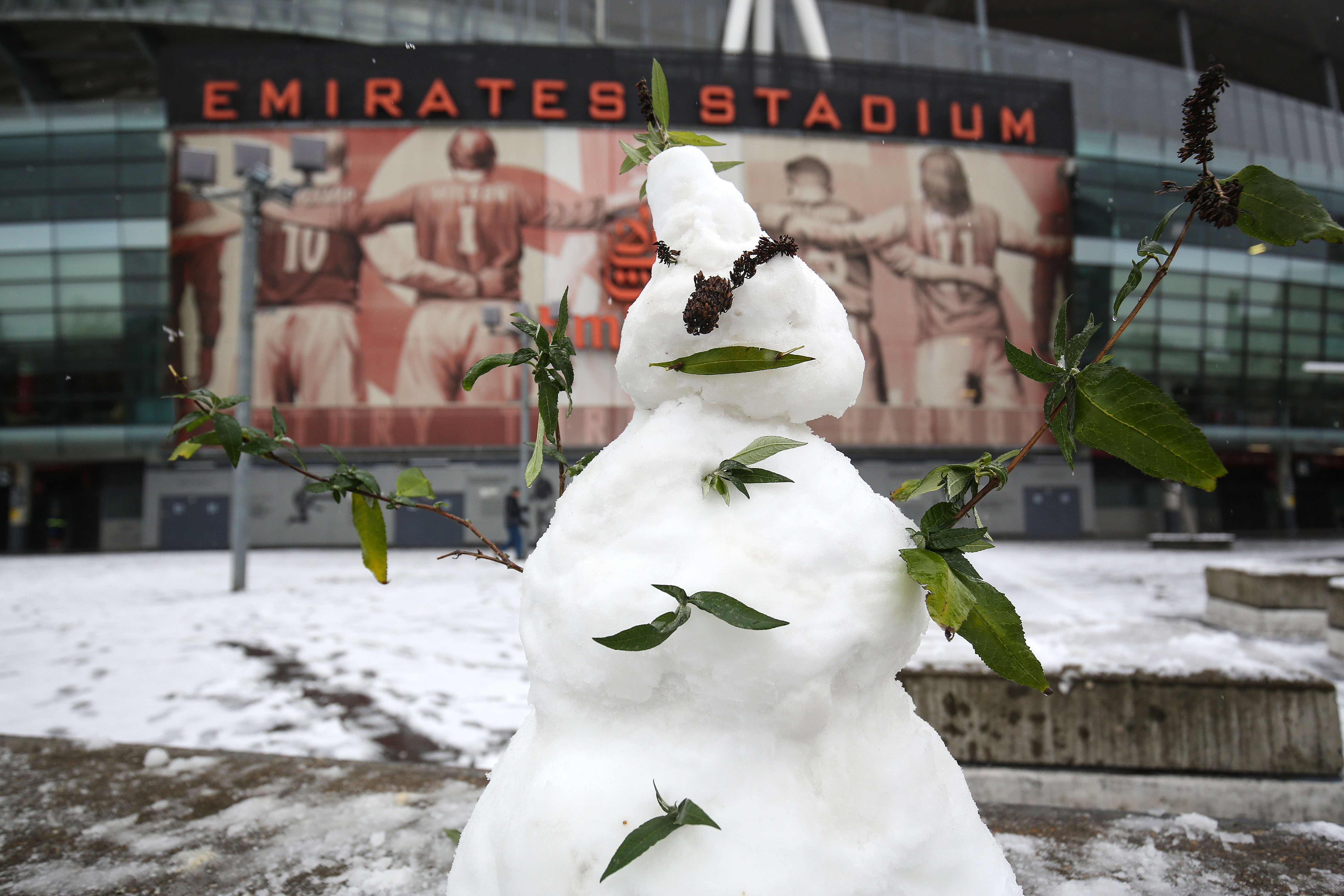 Arsenal host Sunderland at the Emirates. Snow not included

I must humbly apologise for not being on time with my on the whistle report from Elland Road.

I was busy, very busy as it happens. Picking up all of the champagne corks off the floor of Twitter, busily inserting 20 pence pieces into the top of each one hoping to continue bringing us the good fortune we have been experiencing recently.

At the last count I had 4,237 popped corks on my sideboard, some celebrating the away win, some celebrating an assured treble on it’s way to us, there were even a few Champions League winners corks in there as well.

Not sure how they got in there considering we didn’t even qualify for it, but Arsenal Twitter is a strange place to be at times.

What A Difference A Week Makes

It’s funny what a difference a week or two can make, one minute you are down and out the next we are world beaters, only on Arsenal Twitter.

I had a very strange Saturday just gone as Arsenal registered their most convincing away win of the season.

I had a hangover from hell (again) except this time I didn’t have the party on the previous night to commemorate it.

I just woke up minging, dry throat, thumping headache, the full works, what’s that all about?

I wasn’t thumping any drinks, I wasn’t celebrating anything at all, it must just be down too old age, that’s what I’m putting it down too, I had a couple of rums at most, Kraken which is my go to safe place when consuming alcohol.

Bourbon whiskey is off the menu, and one single can of any lager is sure to give me an all day migraine the next day,  I must be allergic to hops or something.

You may well laugh, but just you wait, this curse might well end up coming to you too as you get past 40, you notice it creeping up on you as well.

Every session you have leads to a hangover worse than the last, like some sort of horrific Nintendo boss in a Super Mario game - with the end goal being you end up larruped having had no more than a glass of milk and a cookie on a Friday night.

I didn’t even realise Arsenal were playing in truth, I was laid out on the sofa moaning and groaning like the pathetic excuse for a man I have become. The days are long gone where I could have a session on a Friday, Saturday and a Sunday and still be bright and breezy in for work on a Monday morning.

I inadvertently switched the telly on and flicked over to BT Sport to see our Rip Roaring Reds (whatever happened to that bloke 'RipRoar'?) already 2-0 up and just in time to see Saka scuffing the third goal in off the despondent Leeds defender's legs, to kill the game off.

It certainly cheered me up somewhat, even managed to sit upright for a spell. Amazing what a good away win can achieve for you, from what I saw we looked decent, bit of an attacking threat going on now eh?

Gotta love it, the team is playing with renewed vigour, Lacazette is doing a sterling job with the armband and Martinelli is hitting the high notes and banging in the goals for fun - he is going to make it very tricky to find a place back in the team for Aubamawho at this rate.

But the good news for him is that we have Sunderland ahead of us in the littlewoods/caraboa/ cup type thingy.

Might be a good place to give the bench warmers a run out, not that I want to see us take it lightly, on the contrary, I am viewing Tuesday night's game as our most important yet in this season so far.

It’s vital we keep the wins coming in, it’s vital we squeeze past Sunderland, I really want to see ESR galloping all over the Wembley turf, leaving one two three despairing opponents flat out in his wake.

Only through getting their hands on some silverware will this young team get the much needed experience it will take to kick on and challenge for the title.

I am course talking about David Rocastle, Micheal Thomas, and a certain hungry central defender going by the name of Adams.

I might be getting carried away a little bit myself by comparing these two sides, but you can’t help but feel warm and fuzzy inside when you see a homegrown talent banging his chest and soaking up the adulation of the away fans as he bags the 4th in a 4-1 win away at Leeds.

It was a comfortable second half, and it made me feel more comfortable recovering from the session that never was from the night before - old age: beware kids it comes to us all.

So 4-1 away and we are world beaters again - but I’m not looking any further than Sunderland at home.

If there was one team who might be able to burst your bubble and send you hurtling back to reality, losing to Sunderland at home in the quarter finals of the rumbelows/carling  cup type thingy would be a good pick for it.

Possibly losing to Plymouth or Grimsby or maybe Wrexham could only make it any worse.

In truth, this is a good time to keep the feet firmly planted on the ground and continue to deliver the improvements we have been seeing over the course of the last three games.

But get past Sunderland and we have a semi-final to look forward to. How ironic would it be if we pulled Spurs, like George Graham’s side did in 1987?

I’m almost excitedly looking toward to writing a piece about it before it’s even happened - so on that note I’m going to go back to picking up the champagne corks off the floor on Twitter.

Stay grounded, keep it sensible and keep it real, we are back on a gold run and long may it continue - but with this fan base on Twitter I know we are only ever one bad result away from everyone’s world caving in and the demands for Arteta’s head on a spike will resume again.

Stay focused and do that we need to do. Take each game as it comes, stick to what we know has been working, and most importantly continue to work hard.

It’s so refreshing to see all of the players covering ground, working their socks off and indeed seeing the rewards come their way for doing so.

What is equally refreshing to see is Arsenals fantastic away support going nuts and also being rewarded for their efforts. The two really do go hand in hand together, you can really feel the bond between the team and the fans getting stronger as each win passes.

But let’s not rejoice just yet, as I have mentioned we are only ever one result away from it turning toxic again, and it’s important that you the match going punter don’t fall head first in to that trap.

Let's get behind the boys

Get behind the boys and sing loud and proud and you’ll be surprised where we will end up.

Beating Sunderland and booking our place in the semi finals of the littlewoods/caraboa/ cup type thingy would be a magical way to keep our run going, a chance for this young team to shine at Wembley - but I’m getting carried away here and romanticising when I am calling for feet to remain on the ground.

So on that note I shall bid you farewell and adieu, with a promise that whatever happens tomorrow night I won’t be drinking a beer to celebrate it, not with these phantom hangovers from hell I keep getting, it’s not right, old age, but what can you do eh?

And please for the boys, sing up tonight, let’s make Ashburton Grove the cauldron it should already be by now - and let’s see us 1-0 up before the Sunderland players have so much as touched a blade of grass.