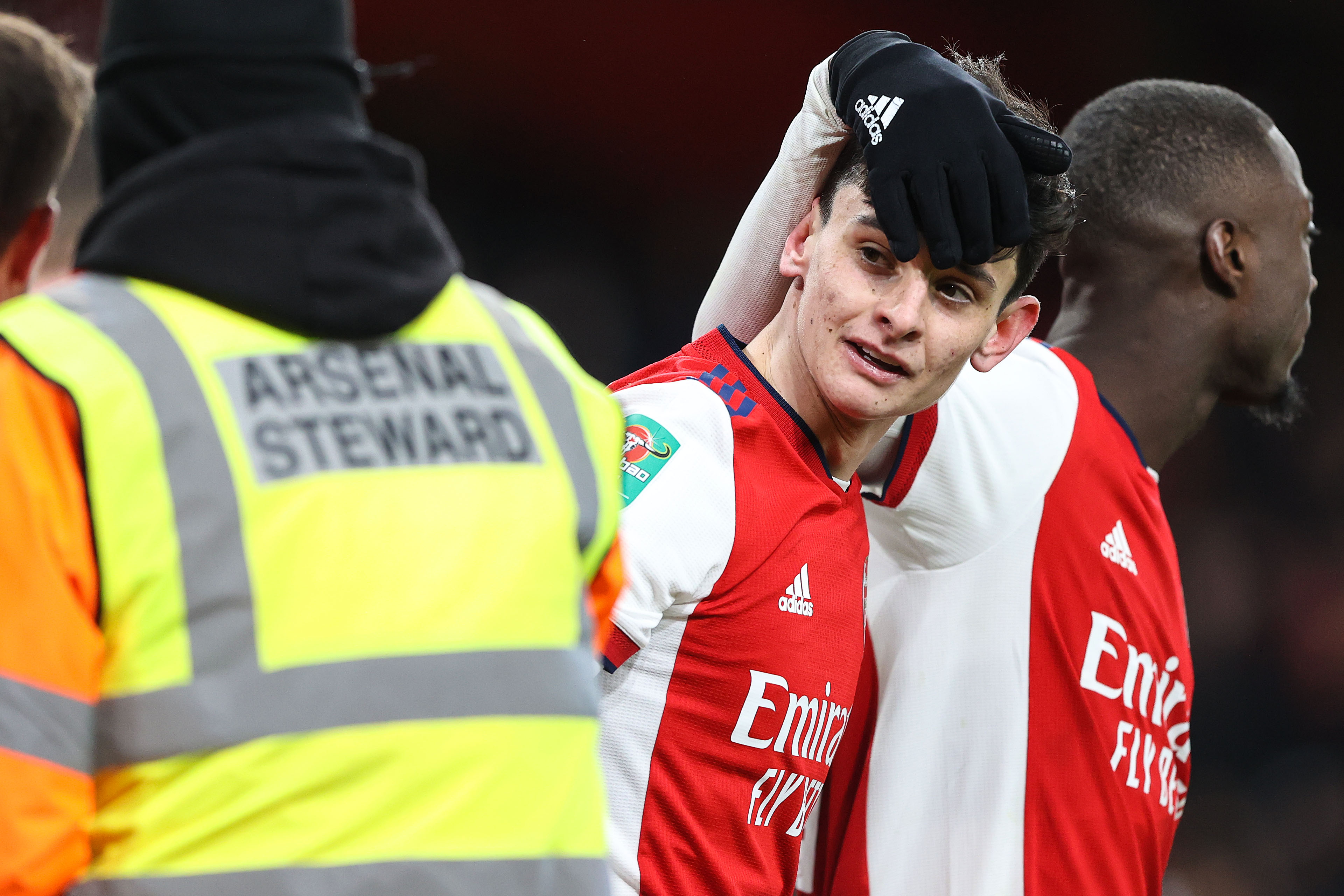 View From The Armchair's realtime take on Arsenal 5-1 Sunderland

First things first I’m not drunk, hungover or laid up with Covid so I am here in attendance, kind of, minus the cold, the train journey and the wallop in the wallet you take when you go to the football.

I am writing this as it happens, and I’m excited by this line-up.

My underdog favourite Pepe returns and a chance to have a closer look at Balogun up front.

The chance to play in a nigh on full Ashburton gives him a glorious chance to stamp his name in the history books tonight, make his mark, and give the manager more food for thought when it comes to reducing our wage bill.

You may or may not have picked up on my ramblings that I lean more towards jettisoning our main central striker Aubamawho out of the club at this point.

That might be harsh on my part, but I think I have seen enough of him over the last 40 games or so to conclude he’s done, washed up, just picking up the excessive wage.

Arsenal vs Sunderland: First half

16 minutes in and Arsenal have a corner, we have already hit the bar. Rob Holding meets the header and Eddie Nketiah slots the ball home with what can only be described as a knee bobbler.

The crowd are lively and up for it tonight, always great to see, it looks like the Sunderland fans have bought a few down with them as well, so it’s nice to keep them quiet and shivering up the other end.

Noticeable to me that their players didn’t take the knee at the start, if we keep their fans sat down in their seats it might help to keep the wind chill down a bit for them.

Halfway through the first half and Balogun has missed two good chances already, maybe wait until after the African Nations Cup before we decide whether to offload Aubamawho.

The team are looking good, defensively sound and I have what sounds like Stan Collymore on the commentary, though I could be wrong.

Pepe’s getting lots of space down the right, linking well with Cedric, My man Pepe scores to make it 2-0.

Could not have asked for a better start than this, but even as I’m writing this I’m expecting this young hungry team to keep their foot on the pedal - so much to prove and young enough to not know any different, it’s all looking rather comfortable.

Sunderland pull a goal back

Stick a third goal in here and we might see them sneaking for the entrance. But lo and behold a beautiful little through ball and a nice dinked finish and Sunderland are right back in this game 2-1.

Immediately the home fans find their voices again, this is the spirit, this is what I want to see from our fans, this is what I miss the most from not going to the games anymore, that roar that comes from deep within from 1000’s of supporters getting behind the team in unison.

34 minutes in and Leno pulls off a great save diving low to his right to keep the score as it is. They are going to need you tonight in that ground, this game is far from over and won.

Every time the Sunderland fans attempt to find their voices they are drowned out by a retort from our fans, brilliant.

I will be happy to see us get in as we are for half time here, we should be coasting but nobody did anything wrong for Sunderland’s goal, it was just a well worked surprise counter attack.

Sunderland are doing a decent job of marshalling ESR, but that will leave spaces for others to move into, another good period of possession by the boys has me hoping for a third.

Pepe goes down claiming for the a penalty but it’s not, no VAR tonight, a throwback, interesting experiment, hope it doesn’t cost us.

Smith Rowe crashes in a buddy holly on the stroke of half time which is well saved by their keeper, and their striker who scored their goal fancies a little sit down to see time out. I’ll take it as he heads off down the tunnel with his nights work ending early due to injury, handy for us as it was a decent finish for his goal, the half time whistle blows and the score stands at 2-1 to Arsenal.

Arsenal vs Sunderland half time

Second half to come and I’m expecting big things from Pepe, he looks to be the main attacking threat for the boys, and he’s in a position to confirm what I already know to be true, he is clearly the greatest player to ever pull on a pair of football boots - and he’s on the pitch and under the floodlights for the Arsenal.

Some insight from Kevin Phillips and Paul Merson in the studio at half time, he was a decent striker for Sunderland wasn’t he, deserves a statue probably for his contribution to their club alongside the beanpole Niall Quinn.

A short ad break before a one line sentence from someone else and it’s into another ad break and we are set to get off underway again. Probably the easiest couple of quid Kevin Phillips has ever had in his life this for this tonight.

A long hoof up the field  and off we go for the second half.

Arsenal need a third goal here, I can sense the unease in the stands, this game has hit that weird point where it falls silent and no one seems to remember how to start a song, the crowd needs the players to provide the spark and vice versa.

Odegaard is pulling the strings in midfield, Tavares whips in a cross and Eddie Nketiah provides the spark I was looking for 3-1.

Just in the nick of time, if Sky Sports were able to have their way they would slot another advert in here right about now, but as it stands It’s still in play and I’m hoping Eddie can nab his third.

It would also be nice to see Balogun get on the score sheet. 54 minutes and Sunderland graze the post, a long range effort that has Leno beaten, Granit Xhaka comes on for Balogun (a sensible decision after he was booked 120 seconds earlier) so no more chances for him to shine tonight.

However, I am sure the experience of playing in front of this crowd tonight will stand him in good stead as he develops.

57 minutes in and a slide rule pass from from Odegard brings oohs and aah’s from the crowd, a sweet little nutmeg from the worlds greatest player brings a few more and gets people off their seats before his pass is sumptuously finished with a cheeky back heel past the keeper to make it 4-1.

What a goal, what a finish Aubamawho?  If the message has not been received loud and clear by now it never will be, Eddie has his treble and we need to be doing whatever we can to convince him to stay.

I’m really not looking forward to seeing him depart after tonight’s performance, he clearly has a keen eye for goal, has youth on his side and the knack of the ball finding it’s way into the net whatever part of the body the ball hits him on, a handy skill to have.

77 minutes in and Martineli is on the pitch, much to the delight of the Sunderland fans no doubt, at 4-1 down it’s not really what they want to see, even more so as another young gun enters into the fray as Charlie Patino comes on for 10 minutes of action.

I have to doff my cap to the travelling support tonight, I’ve not seen too many sneaking out, and they have had every right to do so tonight.

Arsenal have been dominant and we even have a light show to enjoy on 81 minutes as the crowd all wave their phones about with the torches on.

Might also have heard a rousing rendition of “what the f*#*#*n hell was what” from a section of the crowd as well there, haven’t heard that for years - well played.

There’s still time for a fifth here, Eddie goes over and the penalty is given before it’s rightly chalked off for a goal kick instead, probably the right decision upon closer inspection.

Moving on up into the closing minutes and this game delivers the highlight, and another assist from the worlds finest player and a stand out moment for the super sub Charlie Patino, shaping to slot it in with this right before slightly adjusting to guide it home with his left.

A debut goal and a song from the crowd to boot, the stuff of dreams for a teenager this, he won’t be sleeping much tonight, it’s there it’s in the record books and the final whistle goes 5-1.

What a performance, Eddie has the match ball highly deserved and the team troop off with a decent nights work under their belts, on we go.

PS See you next time hopefully with a clear head as I enjoyed this game tonight, safe travels to the fans you were absolutely immense tonight, from start to finish, and look what the team did for you in return, lessons to be learnt all round methinks.

Buy issue 284 for our exclusive interview with Charlie Patino

Be like Charlie and susbcribe to the Gooner Fanzine here