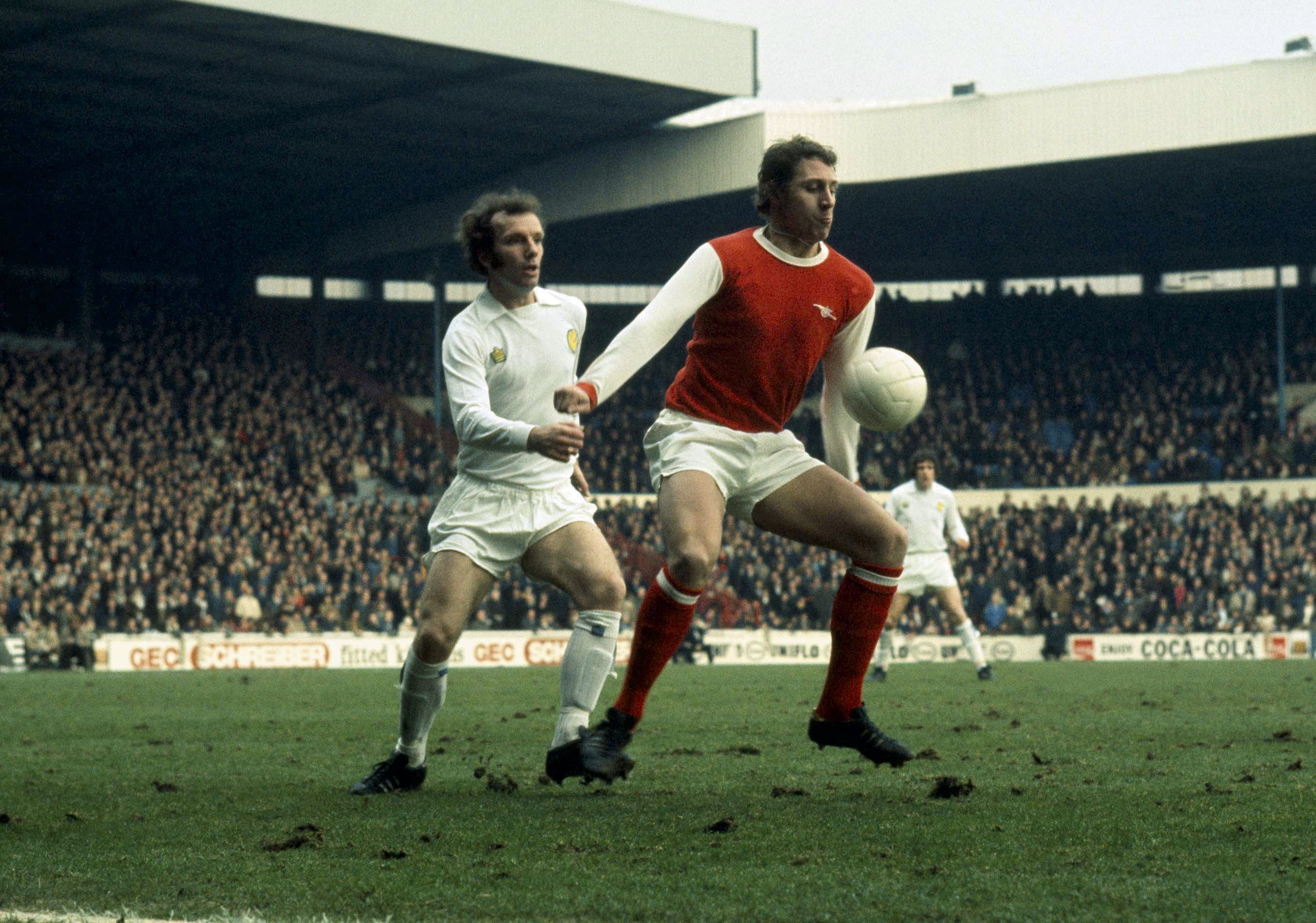 John joined the club as an apprentice in 1962 and played for the Gunners until December 1976, making 481 appearances. Only Cliff Bastin, Ian Wright and Thierry Henry have scored more goals in an Arsenal shirt with Radford's tally standing proud at 149.

When John Radford soared in front of the North Bank before crashing a header into the net against Anderlecht in the spring of 1970, it was as though he was carried on an irresistible up draft of barely contained hope and expectation, the raw emotion which poured that night from every corner of Highbury.

When the ball hit the net, it was like all the streets around the ground suddenly burst into a golden, raucous glory, when the roaring and cheering, which blew not just the lid, but the entire sky over North London off, tumbled over and over in a confusion of noisy joy.

The memory may now have drifted off down some long-lost side street in history but those cries echo still in my mind and the quiet man from Yorkshire hangs eternally in the air, awaiting the moment to grant deliverance to us all from 17 years of emptiness.

John joined the Gunners in 1962 as an apprentice, and signed professionally two years later. It was the start of a relationship which lasted 14 years, until 1976, when the winds of change, represented by the bandy-legged, Boy’s Own figure of Malcolm Macdonald ushered him out of the door in the direction of the Boleyn Ground.

Radford’s career at Highbury remains one of the great football careers, but it was done with modesty, unselfishness, and a work rate which frequently went unnoticed, plying his trade beneath the spotlight, but then how many of the great 1969-1971 team could that be said of? Among a whole host of candidates, Radford, though, could well be the perfect icon for that team’s greatness, fortitude, and commitment.

He remains fourth in the all-time Arsenal goal scorers list, with 149 goals, behind such luminaries of Arsenal’s history as Henry, Wright, and Bastin; at the age of 17 he became the youngest hat-trick scorer for Arsenal, and it is to his great credit that he remains remembered for his all-round contribution to the side, a contribution which manifested in his goal creation for others, as well as his own goal tally, and not least for a stint in goal in an FA Cup semi-final (when his goal remained un-breached in a tense finale).

Radford commented long after his retirement that there was always more to his game than ‘just’ goal scoring, indeed all of his strike partners returned sizeable goal aggregates, testament to his unselfishness.

One instantly noticeable thing from any montage of his Arsenal goals is the variety of finishes they include: right foot, left foot, power header, placed header, chip, volley, and some good old-fashioned boots through the ball.

Two particular games spring to mind; the afternoon he scored a brace from narrow angles in a 3-1 win at Wolves; and a wonderfully composed finish at Anfield in the mid-winter mud. Receiving the ball inside his own half, and after splitting and leaving two defenders floundering with his first touch, he evaded challenges, took the ball round Clemence and slid it into an empty net in front of the Kop to seal a 2-0 win which took the Gunners top.

His goal in the 1970 Fairs’ Cup final will be remembered for as long as Arsenal plays football (his own favourite moment in an Arsenal shirt); he set up both goals in the 1971 FA Cup final, after contributing 21 goals to our successful charge to a typically Arsenalesque title triumph in the same season.

At Villa Park in 1972 Radford famously went in goal following an injury to Bob Wilson and calmly helped his team through the last 15 minutes to secure what the press described as a ‘magnificent draw’, and a replay the following midweek at Goodson Park, where recovering from a goal down, Radford was again at the centre of events scoring a true predator’s goal to win it, darting to the near post and scoring with a strong touch on Pat Rice’s cross.

Radford’s dependability over the course of both games epitomised what was needed to see off an ‘enthusiastically determined’ Stoke City for the second year running in the semi-finals. Twice Stoke had been in the box seat, but on neither occasion could they finally see off a resilient Arsenal.

Occasionally players emerge who come to symbolise the teams they played for, and perhaps the greatest compliment I could ever pay Radford is that in my mind he sums up and encapsulates what that team was all about.

To be a man who could be said to illustrate all the qualities of a ‘double’ winning team is a footballer who well and truly left his mark on the game.

Happy birthday John, from grateful gooners the world over!

Read David in every print issue of the Gooner

Jimmy Bloomfield: An Arsenal player of subtle panache - born on this day in 1934